If you read the tech press, you might have seen reports that Uber is pursuing a sale in Southeast Asia that would see Grab, its Singapore-headquartered rival valued at $6 billion, acquire Uber’s business in the region.

Rumors of such a tie-in have been rife for a while. Uber sold its China business in exactly such an arrangement in 2016, and it made a similar exit from Russia last year. In both cases, the firm’s motivation was to purportedly shape up for a potential IPO by offloading loss-making units that had lost the local market.

Why not, then, extend that into Southeast Asia and sell to Grab?

Reliable data is hard to come by, but it is fairly widely accepted that Uber, once the leader in Southeast Asia, has dropped behind Grab across the region as a whole, while both companies trail local startup Go-Jek — a unicorn itself, too — in Indonesia, the only market Go-Jek operates in.

Despite a cumulative population that exceeds 600 million people, Southeast Asia’s ride-sharing business did just $5.1 billion last year, according to estimates from a report authored by Google and investment firm Temasek. Uber is not expected to be profitable in the region “in the near future,” CEO Dara Khosrowshahi said last year.

There is the motivation.

Uber and Grab share a common investor in SoftBank. The Japanese firm first backed Grab back in 2014, and it recently pumped in $2 billion in fresh capital alongside China’s Didi Chuxing — the company that bought Uber China and, by virtue of that deal, is also an Uber stockholder. SoftBank, of course, secured a much-publicized investment in Uber in January.

Pitting two of its portfolio together in a loss-making market probably doesn’t make sense to SoftBank at this point.

Someone, somewhere, seems very keen to make a deal happen, and so we have the reports.

Last week, CNBC cited two people “with knowledge of the matter” who said that Uber “is preparing to sell Southeast Asia unit to Grab.”

The news was widely re-reported by a number of other media. But if you skip down to the second line of the original CNBC article, the transaction seems less definitive that the title suggests.

“No deal has been reached yet, and the timing of any such deal is uncertain,” CNBC reporter Alex Sherman wrote.

Uber and Grab both declined to comment on the report when we asked. 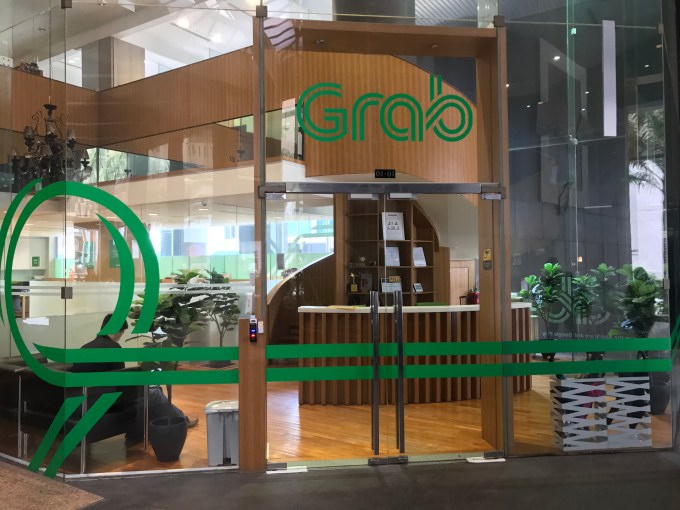 The Grab office in Singapore

The deal can make sense in financial terms, as above, but in practice there are certainly some question marks.

Uber may have fallen behind Grab, but it still has the brand. Uber invented ride-hailing, and it can continue to maintain a sizable market share, if not close the gap with some investment.

The word Uber is already a verb to many people, such is the company’s profile, and that isn’t just limited to the English language. There’s a huge amount of consumer awareness that Uber trades on, even when its competitors push hard with discounts, marketing and other strategies, is very much alive in Southeast Asia.

The market in the region is tipped to grow massively.

The same Google-Temasek report noted that the ride-hailing market in Southeast Asia has grown four-fold since 2015 and it is tipped to reach $20.1 billion by 2025. More generally, Southeast Asia is now the world’s third-largest region for internet users — with more people online than the entire U.S. population — with upwards of 3.8 million people coming online for the first time each month.

It might be hasty for Uber to retreat at this time. Certainly, the chips are down and things have been better, but the game is far from won as it was in China, where Uber had little mainstream recognition and was spending over $1 billion just to try to keep up with Didi.

There hasn’t been much of a reaction to the reports from Uber, but this week Khosrowshahi — who was in India as part of his first Asia tour with Uber — made a series of bullish comments that seemed to reaffirm a commitment to Southeast Asia, according to Reuters.

“We expect to lose money in Southeast Asia and expect to invest aggressively in terms of marketing, subsidies etc,” Khosrowshahi told reporters in New Delhi, adding there is huge potential in the region thanks to a big population and fast internet user growth.

You could, of course, offer a counter argument that Khosrowshahi is playing hard to get or making negotiations with Grab tougher. But the Uber CEO also pointed out to press that SoftBank is just one shareholder and thus its aims and objective don’t represent the path that the company will take.

Khosrowshahi said SoftBank is an investor but Uber, which has a valuation of around $68 billion, will take any final decisions along with the board on mergers and partnerships.

There has certainly been some suspicion that the leaks may be coming from the investor side of Uber/Grab, given the benefits that consolidation might bring. The fact that these leaks have also intensified since SoftBank became interested in an Uber investment, certainly gives credence to that theory.

Indeed, SoftBank board member Rajeev Misra — who joined the Uber board following the investment — told the Financial Times that Uber should focus on Western markets and cut its losses in emerging regions.

Is SoftBank the source of these new leaks? You can draw your own conclusions.

So, while a deal might make some sense on paper, reports of an imminent acquisition seem wide of the mark. That said, this is the ride-hailing industry, and anything can happen.