If you own a car or home, one of the biggest challenges you’ll face is finding the right insurance plan that’ll cover everything you need and save you some money — but those plans are always changing, and consumers are getting stuck footing a bill they don’t necessarily need, according to Hanno Fichtner.

That’s why he started Gabi, which gives car and home owners a way to keep track of their insurance plans — and find new plans that are cheaper when they become available. The main goal is to help car owners avoid overpaying for car insurance as the plans change over time, and other providers end up giving them a better deal for the coverage they need. That can be a result of changes in your personal life, or changes on the provider’s end, but in the end, consumers may have an opportunity to save money. Fichtner said today that Gabi has raised $9.5 million in a series A financing round led by Canvas Ventures, with Correlation Ventures, Northwestern Mutual Future Ventures, Securian Ventures and other existing investors participating.

“When you sign up, for insurance, you buy it at some point and then you forget about it for like six years,” Fichtner said. “During that time, you are overpaying lots because you are not getting the cheapest rate and the best coverage. That’s due to changes in the insurance rate, changes in your personal life situation. That’s why people are overpaying, we calculated [consumers are overpaying around] $50 billion in insurance premiums per year. We tried to reduce that amount with technology.”

At each renewal period, Gabi users will get a notification if there are cheaper plans. The plans are generally pretty inflexible, which means that users should be keeping track of changes because that’s the way they’ll be able to save money on their insurance. The startup compares insurance from a few dozen companies and tries to identify the cheapest plan with that kind of coverage, and then shows them the way to get that insurance for their property. Users give some information about their needs, and Gabi on the back end tries to figure out which plan suits them best. 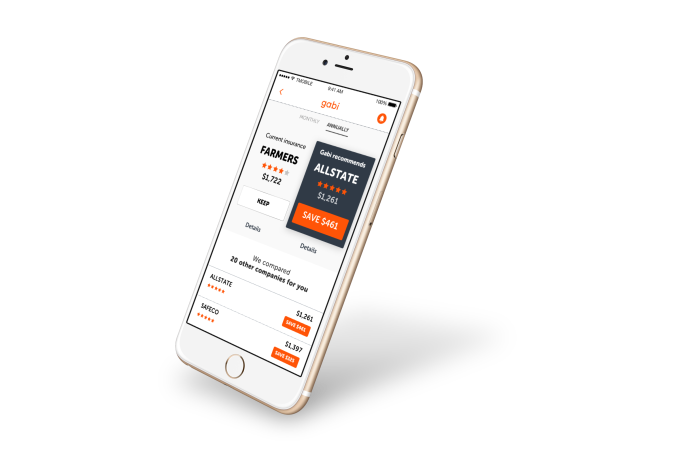 While Gabi continues to collect data on user behavior and see what people are looking for over time, there are quite a number of opportunities. After all, it’s that store of data that usually ends up helping a startup have some kind of defense against potential competitors coming in, and it also helps them target the best offers to those customers. Some time down the line, Fichtner also acknowledged that there may be an opportunity to look into providing insurance itself, given the data it has, but in the meantime, the challenge is making sure all those integrations with insurance providers are in place.

To be sure, there is a lot of competition brewing in the insurance policy comparison space — even if it may not be exploding in car or property insurance quite yet. There are startups like PolicyGenius that have raised big financing rounds, which offers renters insurance, among others. But Fichtner says that the car and home insurance space, due to a constantly shifting environment, as well as the tools it’s created, can offer something that can head off any potential competition coming his way.

“Insurance is super regulated and all rates need to be filed to the Department of Insurance on a bi-annual basis, so it’s impossible to negotiate rates,” Fichtner said. “Even if you said I’m leaving, can I have a cheaper deal, you won’t get it. Unless you change the coverage, but there’s no way to negotiate. If you look at our customer base, on average we find them $460 savings just on the auto insurance, and that’s on an equivalent basis. It’s the same coverage, just a different insurance company.”