When a crisis happens and your system is down, it’s easy for panic and chaos to ensue. Large companies use a range of tools to monitor system health, and finding the source of the problem and ensuring the proper personnel are involved is not always easy.

That’s where xMatters comes in. It acts as an uber monitoring tool allowing you to understand the source of your problem and getting the right people involved to fix it. Today the company announced it has closed a $40 million Series D round led by Goldman Sachs Private Capital Investing.

“We provide an incident management platform, that takes data and signals [from various tools] and helps [teams] to solve the incident as quickly as they can. We’ve been successfully doing that for a number of years,” xMatters CEO Troy McAlpin told TechCrunch.

The platform doesn’t stop there though. It can inform the customer that the system is down and that you are taking steps to fix the problem. What’s more, it provides a post-mortem for what happened and uses a machine learning component so that if a similar set of circumstances come together again in the future, the system can prevent it, or at least warn system admins that there could be a problem coming before it happens. 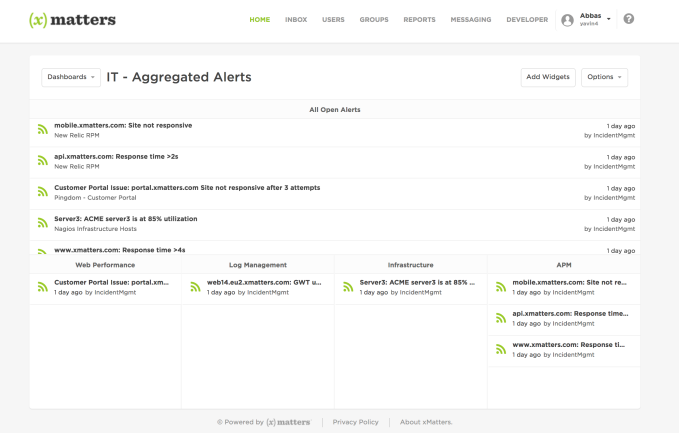 The tool uses signals from a variety of popular tools including New Relic, Dynatrace, Atlassian, Splunk and Servicenow to monitor overall system health. McAlpin says a big difference between his company’s solutions and those of competing products like PagerDuty and Everbridge, is that they move the discussion to the tools that operations teams are using like Jira and Slack, rather than moving them into their tool to resolve the issues. xMatters is simply the glue holding the incident response together among the different components. Customers work in their tools of choice to resolve it.

With the new money in hand, they plan to expand geographically including opening three R&D centers in Canada in Vancouver, Victoria and Montreal to help expand their machine learning and data science understanding. The company processes over a million responses a day and they want to learn to use that data more effectively to help their customers proactively monitor their applications and systems.

The company currently has 500 customers including Box, MGM and Manpower.