Just as the HBO show Silicon Valley skewered the industry’s obsession with placing digital mustaches precisely on people’s faces, the problem of allowing multiple phones to know where exactly your coffee table is could seem pretty laughable. But with augmented reality, things can get complicated and consequential rather quickly.

6D.ai, a young startup emerging from Oxford University’s Active Vision Lab, is aiming to use smartphone cameras to build a cloud-based, crowdsourced three-dimensional map of the world that will let app developers expand their sights and let users gather some actual utility from phone-based AR built on top of Apple’s ARKit and Google’s ARCore platforms.

What’s more interesting is that all of this can be done in the background so that while users are playing an AR game with a passive camera feed — something similar to Pokémon GO — they could also be gathering rich 3D data of the environments that they’re navigating.

“One of the big things holding back engaging AR is for content to feel like it’s actually physically part of the world,” CEO Matt Miesnieks told TechCrunch in an interview. “To really make that effect possible, you need to have a 3D model of at least your room, if not the whole world.”

An early demo of 6D.ai live mapping technology running on an iPhone with an external depth sensor

Miesnieks has been investing in AR startups as a partner at SF-based SuperVentures after having worked in the industry leading an AR R&D team at Samsung and co-founding the AR startup Dekko. Last summer, Miesnieks came across fellow 6D.ai co-founder Victor Prisacariu’s work at Oxford University and decided there was a company to be started. The team of 7 employees now includes Altspace VR co-founder Bruce Wooden, who just came on as the company’s head of developer relations.

What 6D.ai has built ends up functioning a bit like a Waze for AR, using smartphone cameras to build a cloud-based map of the world’s three-dimensional data that will supercharge augmented reality content in a way that could actually make it useful to people.

Your phone’s memory will be able to store the three-dimensional geometry of around 100 meters in walking distance, while the on-device storage can hold city blocks of information. This means that as more and more devices running 6D.ai’s engine hit the streets, a web of phones will begin building up a cloud map of the world’s ground-level three-dimensional data. As other users stumble upon areas that have previously been mapped, 6D.ai will download that information and allow the new user to further refine the precision of the 3D model while pushing 3D interactions further into the distance than their devices can sense.

When you’re talking about a service that could literally have access to a 3D map of the inside of your home, there’s more than a little reason to be concerned about privacy needs. It’s not quite Dark Knight levels, but as more and more developers utilize the API, 6D.ai will build an incredibly powerful three-dimensional perspective of the world.

“We’re very conscious of the potentials for abuse,” Miesnieks says. “So one straight-up rule is that you’re not going to be able to get access to data about a place unless you are physically in that place so I can’t download your home unless you’ve physically invited me into your home and I’m there already.” 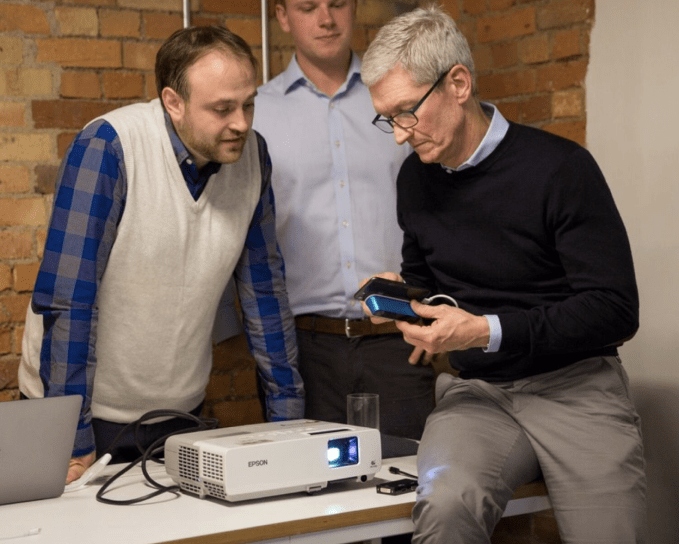 The use cases of such a technology expand far beyond phone-based AR. Miesnieks says the company has been talking with drone-manufacturers and robotics companies, as well.

With all this additional 3D data available on the device, other technical problems facing AR become a lot easier to handle. What makes multiplayer AR gaming so difficult is that both phones generally have needed to be seeing the world from the same vantage point in order to sync up, meaning you literally would need to put a phone next to another user’s to sync up your maps before starting a joined game or app.

Miesnieks says that, at launch, his startup’s tech will allow users to sync up within 70 degrees of each other when focused on the same point in a space (within a few meters). A few months later, he claims that users won’t have to deal with this repositioning at all and will be able to complete the process from any angle at any distance.

6D.ai isn’t the only company tackling these backend AR challenges. At Google’s most recent I/O conference, they detailed work on a technology called VPS that uses AR tech to help orient a user’s smartphone. Pokémon GO creator Niantic Labs also just bought Escher Reality, a startup dedicated to solving some of these backend issues around persistence and multiplayer.

Nevertheless, 6D.ai has its own unique strengths as it uniquely looks specifically at building a richer set of 3D mesh data. “The fact that we’re a startup with access to Oxford’s ongoing IP means that we can continue to push the limits,” Miesnieks says.

Miesnieks already has eyes on where it moves further, saying that after the startup launches its first API set in March — focused on getting the geometry and establishing multiplayer — they will be working more on segmenting the data so that its system can identify what 3D data belongs to which real-world object and whether that object is a table or chair or a wall.