Snap, Nike’s Jordan brand, Darkstore and Shopify teamed up in a collaboration of epic proportions to pre-release the Air Jordan III “Tinker” on Snapchat with same-day delivery last night after the NBA All-Star game. This is the first time a brand other than Snap has sold a product via Snapchat.

The thousands who attended the Jumpman All-Star after-party in Los Angeles last night were able to scan exclusive Snap codes to receive the shoes by 10:30pm that same night. Once they scanned the Snap code, they were brought into the Snapchat app, where they could then purchase the sneakers.

Within 23 minutes, all the shoes sold out, Darkstore CEO Lee Hnetinka told me. Darkstore, a startup that aims to become an “invisible retailer,” facilitated the deliveries. 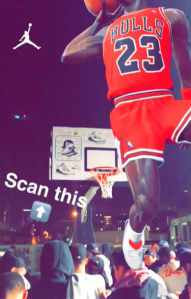 “This is the Holy Grail of the experience [Nike is] trying to intend, which is direct to consumer — to the actual consumer, versus a bot, — and same-day delivery,” Hnetinka said. “The Snap code introduces a new paradigm for commerce.”

Darkstore works by exploiting excess capacity in storage facilities, malls and bodegas, and enables them to be fulfillment centers with just a smartphone. The idea is that brands without local inventory can store products in a Darkstore and then ship them out the same day.

In addition to the exclusive Snap codes, Snapchat geofenced the area over the Staples Center in downtown Los Angeles during the All-Star game. Within that geofence, fans had access to a special 3D augmented reality Michael Jordan lens.

The official release for the shoe isn’t until March 24, but Nike wanted to do something extra special in celebration of the 30th anniversary of Michael Jordan’s slam dunk in 1988. That dunk is often referred to as the moment when Jordan “took flight.”

This isn’t Nike’s first time selling shoes via app-based experiences. Last June, Nike’s release for the SB Dunk High “Momofuku” required people to go a Momofuku restaurant, or to the Momofuku website, and then point their camera at the menu in order to see a sneaker pop up in augmented reality. From there, sneakerheads could purchase the shoes. Similar to what Nike is doing with Snapchat, you have to physically, or virtually, be somewhere in order to buy a pair.

“Jordan Brand and the Jumpman represent greatness, so we hold ourselves and our partners to that standard to create distinct and meaningful experiences for our community,” Jordan Brand Senior Director of Global Digital Dan Harbison said in a statement to TechCrunch. “To execute on that, we worked with some of the industry leaders in this space. Snapchat had an existing partnership with Shopify to create the frictionless commerce experience, so we felt that would make sense. We had also talked to Darkstore and liked their same day delivery solution and learned they had partnered with Shopify in the past, so that became an easy decision.”

This collaboration also marks Snap’s most aggressive move into the in-app e-commerce game. Snap launched the Snap Store within the Snapchat app’s Discover section earlier this month to sell the Dancing Hot Dog Plushie, Snapchat winkface sweatshirt and other Snap-related products. At the time, TechCrunch’s Josh Constine noted Snapchat could position itself as a way for top brands to reach their audiences in a medium that bridges both shopping and social experiences.