Pandora is plugging a hole in its paid subscription service with today’s launch of Pandora Premium on the web. While free users of the radio service could listen to their stations via the browser, oddly, those who pay for an upgraded experience couldn’t play their music on-demand, build playlists, or take advantage of any of the paid-only features.

Not surprisingly, a web experience was the top-requested feature from Pandora Premium subscribers, the company said.

On the new web app, subscribers can search for any track, album, station or playlist and start playing their music on-demand from search results that are personalized based on listening history.

In addition, Premium subscribers are now able to organize favorite songs, albums, stations and playlists in a section called “My Music” for easy access in the future. 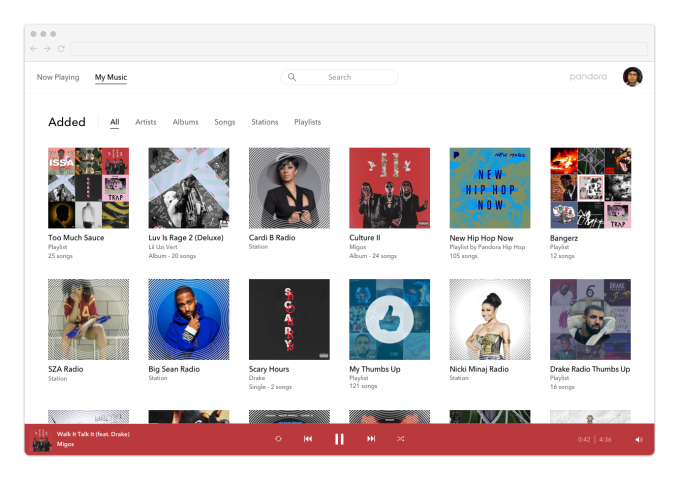 The app will also include Pandora’s playlist-building functionality that suggests similar songs to add to a playlist based on what’s just been added.

The launch of Premium on the web comes at a time when Pandora is struggling in the face of fierce competition from top rivals Spotify and Apple Music, as well as Google and Amazon.

The company reported in its Q3 2017 earnings that its Premium subscribers crossed 1 million in October, and it has 5.19 million paying subscribers in total, including its mid-tier product, Pandora Plus. However, its active listeners declined for the third straight quarter, and its ad revenue missed analyst expectations, growing just 1 percent year-over-year to $275.7 million.

Advertising currently makes up the bulk of Pandora’s revenue, as it’s had trouble convincing a larger portion of its overall 73.7 million listeners to upgrade to a paid service. Pandora, after all, is often what people turn to when they don’t want to pay for a music subscription.

In addition, the paid service itself was not feature-compatible with those from competitors, as today’s launch on the web indicates – rival services had already offered access to their premium tier via the desktop for some time.