If you have purchased a drone in the last year or two, there’s a high likelihood that it only emerges from your gadget closet a few times per year, if that. That probably doesn’t leave you feeling too great about your purchase, but it also leaves an expensive piece of professional equipment lying dormant that a lot of people could use.

DroneBase is a startup that connects drone users with commercial missions so that they can keep the dust from settling on their flying funcopters while also honing their skills and getting paid in the process. People or businesses that are interested in getting drone footage of a property for, say, real estate or insurance purposes, can use the startup to connect with a DJI drone pilot with the skills and equipment to get the video or images they need.

The LA-based startup has announced that it has closed a $12 million Series B funding round co-led by Upfront Ventures and Union Square Ventures. DJI, Hearst Ventures and Pritzker Group also participated in the round.

“This round marks DJI’s third investment in DroneBase through SkyFund, which demonstrates our confidence in their continued success in an industry that, while growing at a rapid pace, is just at the beginning of realizing its full potential,” DJI exec Jan Gasparic said in a statement.

In addition to announcing their latest round of funding, DroneBase is also showing off a new augmented reality enterprise tool that the company hopes will get pro users a birds-eye view of 3D models. AirCraft Pro is in its earliest stages now where users are able to drop scaled blocks into the augmented world as they fly their drone around. 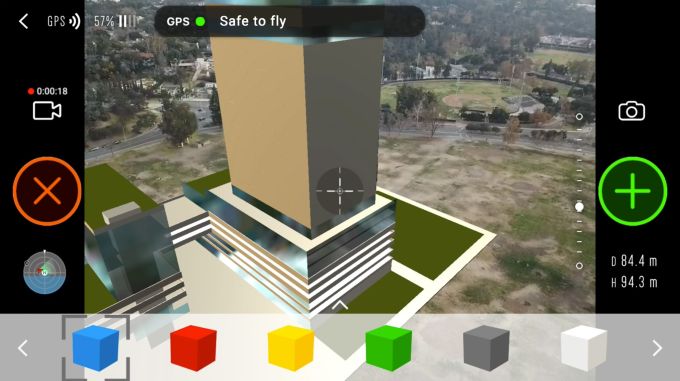 It’s a bit of a game-like environment right now, but the company hopes to use the technology to make imports of realistic CAD models into live drone video snap to their future real world locations.

“There’s unfortunately no ARKit for drones so we’ve had to build some decently sophisticated technology,” DroneBase co-founder and CEO Dan Burton told TechCrunch. “It’s a lot around syncing telemetry data with video data with geospatial data.”

The drone piloting service for DJI owners has also previously only been available to iOS devices but the company is now announcing that the app has arrived in the Google Play Store for Android users. The company has tens of thousands of DJI drone pilots using their app, who have now flown over 100,000 commercial drone missions across more than 60 countries.