Popular payment enabler Stripe announced plans to end support for bitcoin last month, but crypto exchange Coinbase is stepping into the gap after it released a new option for online merchants.

Coinbase — which is best known for its service that converts fiat into bitcoin, Ethereum, Litecoin or Bitcoin Cash — is valued at $1.6 billion after raising $100 million last year. The company reportedly booked $1 billion in revenue last year, according to Recode, and it claims to have served over 10 million users. Now, it is looking to give retailers a more flexible option for collecting payment in crypto.

Coinbase Commerce — its new service launched this week — lets merchants add crypto payment options direct to their existing payment flow or added as a separate option. Unlike past retailer solutions from Coinbase, it is hosted independently of the exchange’s services so a merchant can receive crypto to its own wallet. It is also supported worldwide, so not just in the U.S.. 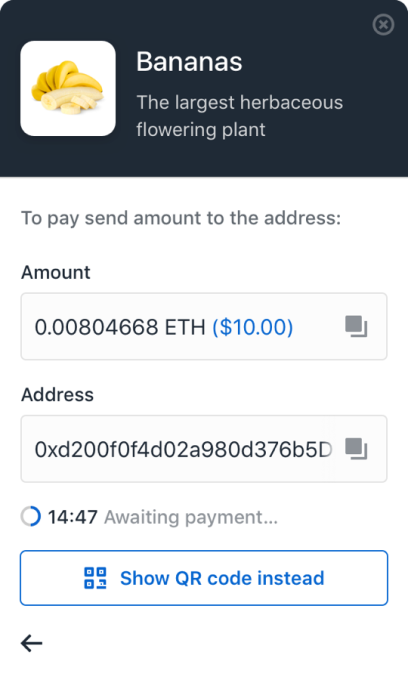 The company has its first integration with Shopify, the e-commerce hosting site that claims over 500,000 merchants worldwide.

Offering a solution is one thing, but some merchants have been burned. Steam, for example, stopped support on account of the rising cost of transactions. While there are new solutions coming to the fore to reduce those fees and quicken transactions — Coinbase itself is among the trialists — and the cost has dropped noticeably of late, merchants may still be reluctant on account of price volatility.

Then there’s the question of whether crypto holders will spend their digital currency rather than keep hold of it in the hope that it’ll be worth more.

Bitcoin, Ethereum and others went on a tear last year, with huge valuation gains, but a bloody dip over the past month has seen those prices drop — with the value of bitcoin falling from an all-time high of nearly $20,000 to around $9,000 right now.

Nonetheless, Coinbase has a solution that will allow those who want in, the chance to buy and sell using crypto.