ESPN may be going from a sure-fire cable bounty to something that needs a little more flexibility in a cord-cutting era — like launching a new streaming service in 2018. But an even more troublesome trend may be emerging among younger sports fans, according to Overtime CEO Dan Porter: they just aren’t getting the content the way they want it.

Indeed, a recent study by the NCAA found attendance at college football games for FBS schools fell 3% year-over-year as it seems clearer that the traditional way of presenting sports — live games, roundtables like SportsCenter, and even the stadium experience (with potentially bad cell service) — may need some kind of tweaking. That’s Porter and Zack Weiner’s hope with Overtime, a new network that’s creating sports content geared toward a younger audience that’s more closely tied with storytelling of younger players. Overtime has raised $9.5 million led by Andreessen Horowitz, as well as a number of new investors including the Golden State Warriors’ forward Kevin Durant (naturally) and a huge host of others. The full list of investors is at the bottom, because it is quite long.

“What I found was, if we could find a way to get this younger audience, that would be super valuable and be an amazing way to start a brand new sports network,” Porter said. “Through a lot of experimentation, we found these young audiences were really connected to these young kids who might be professionals in 12 to 24 months. No one had never built a national platform. Some of them, because they’re the first generation of digital-native athletes, have hundreds of thousands of followers — more than professional athletes. There’s a whole kind of interest around them and subculture around them.”

Overtime is, at its core, a startup that creates sports content wherever younger viewers want to watch it. But the company looks to bring exposure to athletes that might slip under the mainstream media radar, as well as find upcoming college basketball stars like Oklahoma guard Trae Young, who is probably one of the most fun players to watch in all of college basketball right now (despite Oklahoma’s current record). A more recent example is Georgetown-bound recent highlight machine Mac McClung. Of course, there are plenty of dunks on Overtime. These videos show up on a number of different platforms and Overtime aims to keep that process platform agnostic, going to where younger viewers are going to begin. And as players become more popular on Overtime, and those younger viewers find them, they’ll grow with the platform. 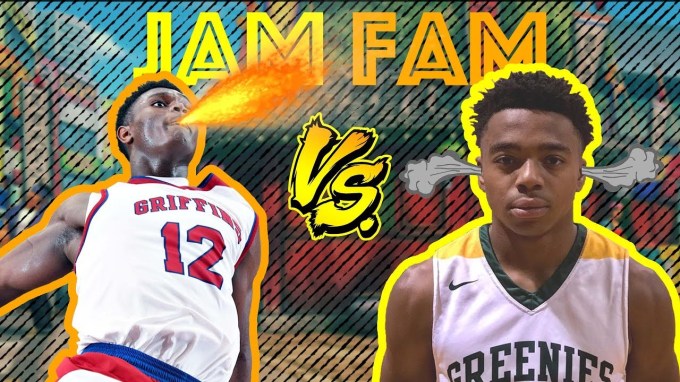 “I don’t want to be a hub, I don’t think anybody in the world has been successful with a hub strategy,” Porter said. “I want to be everywhere kids are. Tons of kids love us on YouTube, but some don’t use Twitter, and ones on Twitter don’t use Facebook. On TV, we have two deals with Comcast, NBC, to provide programming, and I’ll continue to go after every platform. You can burn through a tremendous amount of money on day 1 when you have no name recognition and community and brand trying to launch a channel out of nothing. What we want to do is not only get this young audience but leverage technology in a way that kind of guts the traditional television cost structure.”

Many of Overtime’s videos end up racking up hundreds of thousands of views on YouTube, just for one example. But there’s also, of course, an app for the service that allows you to follow specific players — especially rising stars. Following the page of an upcoming player like Zion Williamson, the number-two recruit in the ESPN100 class, brings up a grid of some of recent plays from Williamson that you can flip through and then jump to videos of those plays. The idea is that Overtime might serve as a platform for hundreds of students or younger viewers across the country that will also capture some highlights from some of these rising stars. 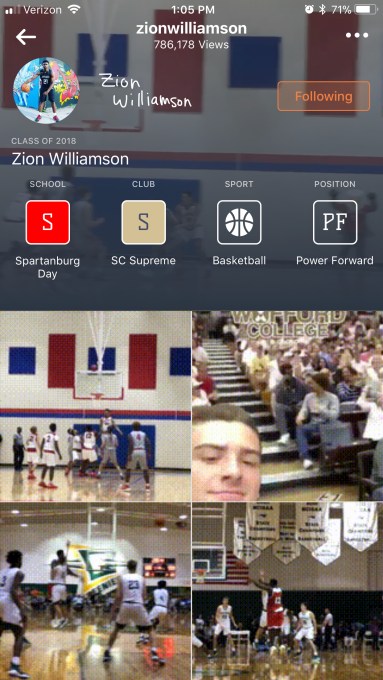 (Williamson also committed to play for Duke University for the 2018-2019 basketball season alongside the other two of the top 3 recruits. Duke exited in the second round in the 2017 NCAA Men’s Basketball tournament, and most recently fell to No. 14 North Carolina 82-78 on Feb. 8.)

It’s also gotten the attention of many NBA players including Durant, and that kind of positive hype cycle for players with existing stars breaking down their strengths and moves can create a sort of flywheel to get more and more content coming from Overtime. The startup looks to have three kinds of pillars: the user-generated content, where Overtime can collect content from fans that want it on Overtime, that kind of curated content, and also the actual storytelling from members of Overtime’s editorial team. In the latter case, Overtime can send out a team to follow around an up-and-coming player and thread together a number of stories that go across different channels. All of this is done with the hope that Overtime can reduce the cost overhead of parachuting team members to a single game — like a rivalry game between Michigan and Ohio State — and then sending them on to the next thing.

“A huge portion of our content is actually the athletes,” Weiner said. “All we have to do is be in the right place at the right time and capture it. That’s a very different cost structure versus five people sitting with a producer and an editor thinking what we’re gonna create from scratch. It’s the beauty of sports. We might go to Virginia but we there might be so many thing with that athlete that it fills multiple buckets of content. And it’s digital-first. Your cost structure is always different and the nature of what you’re creating is different. We’re able to create a lot of content with a very small team.”

Still, as many of the stories are about young athletes, Porter recognizes that Overtime also has to be a part of them maturing as an online persona as much as anything else if they hope to be the ones to popularize undiscovered talent. “If they don’t edit themselves, we will for the most part because we’re not trying to be sports media, we’re not trying to bring them down,” Porter said. “They’re young people with a whole life ahead of themselves. We definitely think about everything we publish.”

To be sure, there are a lot of different plays to figure out what next-generation sports content might look like. There’s of course networks like Bleacher Report. Media networks like the Athletic also seem to be getting more and more prominent, though it at times seems like it has slightly more of a traditional bent like ESPN. Porter hopes that Overtime will be more broad and look more like a true sports network for younger fans based around a community, and what an ESPN geared toward a younger should look like in 2018, in theory.

“95% of our views happen on mobile devices, and I think that’s gonna continue,” Porter said. “For us, the number one thing is to build a community. In my mind it’s way more valuable than an audience. Reddit’s shown that, Barstool Sports has shown that. If we’re the company that’s resonated with them at that moment when they don’t have any allegiances, then we expect they’re gonna grow up with us. As we scale, we’re always gonna be that trusted voice around sports for them. They’re gonna feel a part of the community.”