There’s beauty in the double-blind opt-in. That’s the way you match with someone on Tinder. You like them, they like you, you both find out and get connected. But to date, the feature’s largely been trapped in dating apps that match you with randos or that not everyone wants to be on. That means this anti-loneliness technology is leaving some people out.

[Update 5/1/2018: Today Facebook announced it’s building a dating feature that’s opt-in and invisible if you’re not on it, just like we recommended in this article]

Facebook, meanwhile, is on a newfound quest to stimulate “meaningful interactions,” not just passive content consumption. Its latest attempt is a ham-handed Meetups feature. It surfaces big groups of friends saying some might want to hang out with you, and asking if you’re interested. If you both say yes, it connects you over Messenger.

The idea behind Meetups is smart, but the execution is a mess. Because Meetups ambiguously shows multiple people at once, sends aggressive notifications to participate and encompasses all kinds of relationships, the results are meaningless. You don’t know if someone “chose you” because they actually like you, want to chill platonically, actually were approving of another friend shown at the same time or were just mindlessly clicking through after getting an alert to try the confusing feature. 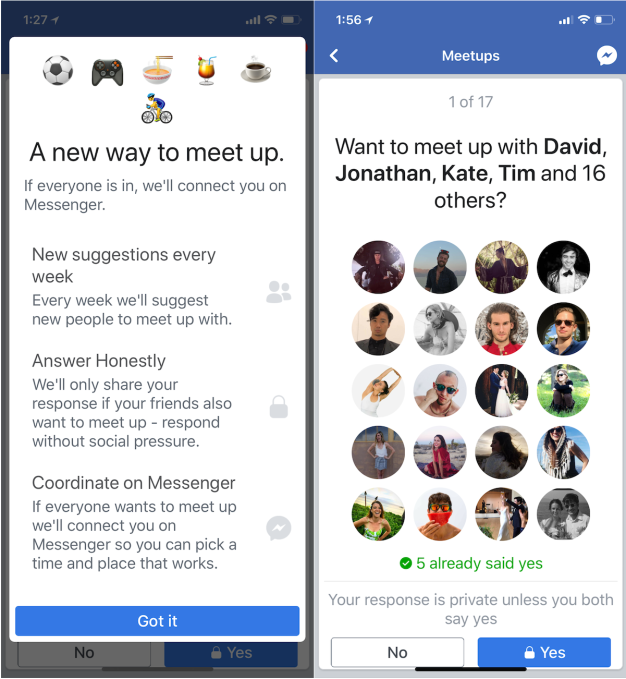 For years I’ve been writing about how Facebook and Messenger should build an offline availability indicator for finding out who’s free to spend time with in person. Messenger’s new test of “Your Emoji,” where you can put a beer mug, or dinner plate, or briefcase on your profile pic for 24 hours to indicate what you’re up to or interested in doing, is a much better approach.

But it’s not designed for dating. And let’s be real. Finding a significant other is the source of some of the most meaningful interactions you’ll ever have. If Facebook can be the matchmaker, it will accomplish its mission while earning tremendous good will from those paired up. And unlike dating apps that become needless to people once they successfully get into a relationship, it doesn’t matter to Facebook if you never use the feature again. 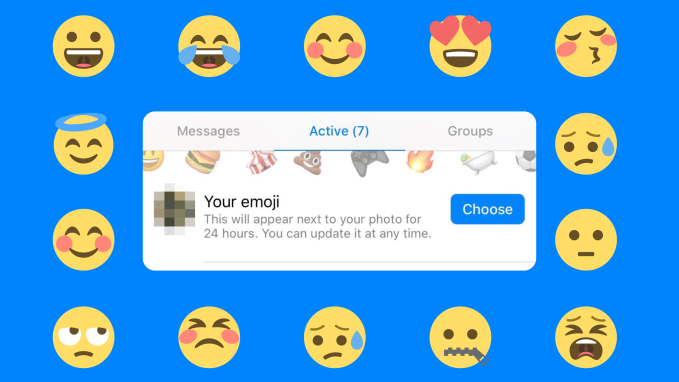 That’s why Facebook should build a “Matchmaker” feature into its profiles.

It’d be completely voluntary from the start. If you’re romantically interested in someone, you could hit a button on their profile that they’ve opted in to displaying. If they hit the button on yours too, Facebook lets you both know.

Here’s the tricky part, or technically, the simple part. Facebook shouldn’t blast you with tons of notifications teasing that someone likes you. It shouldn’t try to get you to guess who it was from a short-list of people. And it shouldn’t push you to swipe through all your friends. It should be subtle. Otherwise, some users, especially women who typically get the majority of inbound interest from men on dating apps, may feel pestered, ogled or even objectified. That’s why many people stray away from sleazy dating apps like Bang With Friends that try to match you via your social graph.

Some will surely cringe at the idea of Facebook getting more deeply involved with our romantic lives. Others might think it’s redundant with Pokes, walls, messages and other ways to connect, even though those are either unclear signals or lack the privacy and protection against unwanted advances of double opt-in. And, understandably, some just wouldn’t want to mix romance into a friendship platform. There’s certainly the risk of creepy dudes following up via message like “I right-swiped you…” Getting this wrong could drive people away from Facebook all together.

But done right, Facebook Matchmaker would hardly exist for anyone who doesn’t want it. It wouldn’t generate tons of unrequited “Yes” swipes. And it’d only result in rare matches. But those matches would be meaningful, because they weren’t coerced, and they didn’t occur on an app designed for finding one-night hookups. They’d be people from whom you already accepted friend requests, in your network, with whom you might already have a lot in common. 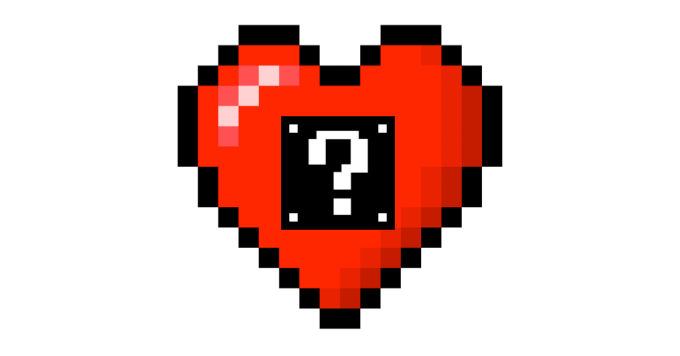 I’m increasingly hearing from friends over 30 that they’re anxious they won’t ever find a partner. But we’ve lost many of the other cultural institutions that used to pair us up 100 years ago.

Globalization of opportunity leads people to leave their home towns. Secularization and the rise of science mean fewer people are connected through places of worship. Multi-generational housing has fallen out of fashion so young adults don’t live with parents and grandparents who could match them with a partner. The positive shift toward women pursuing their own careers leads some to push marriage to later in life. People are spending longer on higher education and prioritizing jobs over family.

And now when we feel lonely, when we might have sought in-person companionship, we have phones full of feeds, memes and games to keep us company.

Facebook’s made it easier than ever to “feel connected,” endlessly scrolling through friends’ photos, while actually allowing us to isolate ourselves. Matchmaker is its chance to fulfill the most fundamental purpose of what we used to call “social networks.”

Guess this prophecy came true. Check out are article on the dating feature Facebook announced May 1st: