In the age of altcoins, at least one news site is taking a novel approach to making ends meet. Salon announced today that it would give readers a choice between turning off ad-blocking software or “allowing Salon to use your unused computing power” in order to access their content. If you say yes to the latter deal, Salon will then invite you to install Coinhive, a software plugin that mines the cryptocurrency known as Monero.

Salon explains its program, which it calls a beta, like so:

… Like most media sites, ad-blockers cut deeply into our revenue and create a more one-sided relationship between reader and publisher.

We realize that specific technological developments now mean that it is not merely the reader’s eyeballs that have value to our site — it’s also your computer’s ability to make calculations, too. Indeed, your computer itself can help support our ability to pay our editors and journalists. 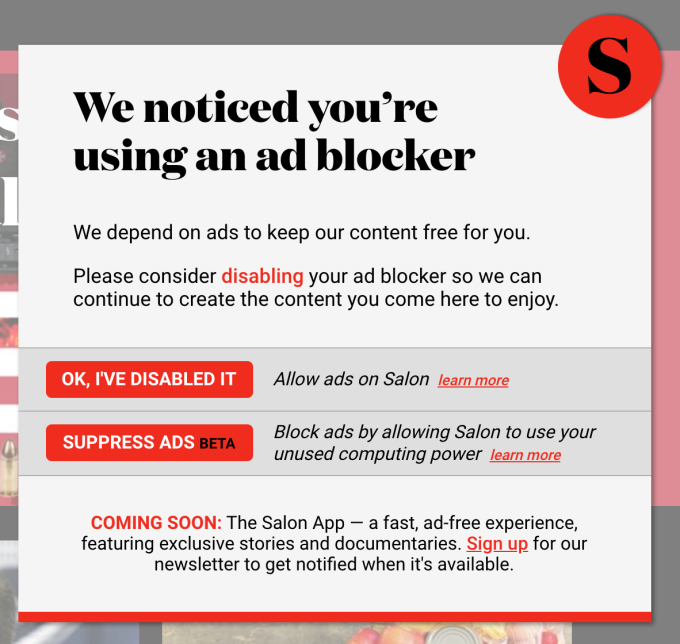 The offering is a clever if controversial way to recoup lost ad revenue. It’s no secret that digital media companies are hurting, and crowdsourcing the process that generates some virtual currencies is certainly an innovative solution, though definitely an experimental one.

Still, running software like this, which is often inserted onto unsuspecting machines via malware, is a big ask from readers, and it’s important that less technical readers know what they’re getting into. Salon sets this up as an opt-in process which is good, though it only mentions Coinhive’s name in the small opt-in box (“powered by Coinhive”) and not in its full FAQ page. Coinhive gets a bad rap because it can be used for illicit purposes, though the software is widely regarded as legitimate, as is the coin that it mines. Readers should have a chance to make up their own minds and be provided with all of the specifics.

While Bitcoin soaks up most of the spotlight, some virtual currency projects are specifically looking to reshuffle the stacked relationships between platforms and content creators. One called Steemit actually launched its own platform to pair with its coin, and users there built up a healthy, cryptocurrency-centric social network, upvoting one another and earning actual money in the process. Like Salon’s proposition, some other projects, including Siacoin and MaidSafeCoin, seek to pay people for spare computing cycles or hard drive space.

On the whole, Salon sounds surprisingly bullish on blockchain technology, announcing that it “[plans] to further use any learnings from this to help support the evolution and growth of blockchain technology, digital currencies and other ways to better service the value exchange between content and user contribution.”

Like publishers, plenty of internet users are waking up to the raw deal of modern-day social media use and are looking for novel ways to make a little passive income or otherwise get paid for the content they push out to the world. Blockchain projects that aren’t too busy overhyping ICO gains to actually build something cool could have a shot at democratizing the online content game.

While that might be idealistic, Salon sounds like it understands that emerging technologies offer some unique opportunities for anyone who isn’t afraid to rock the big blue boat. Since it’s clear that the model we have now isn’t working for anyone outside the high walls of tech’s major platforms, there’s no shame in that game.