The free app guides patients through exposure and response prevention (ERP) exercises, a type of cognitive behavioral therapy that is especially effective for OCD. ERP carefully exposes suffers to stimuli, including images or situations, that trigger their symptoms and then guides them through exercises to help them manage anxiety and compulsive behaviors. nOCD’s founder and chief executive officer Stephen Smith describes ERP as a “virtual gym.”

Smith began working on nOCD, which launched in 2016 and now claims 80,000 community members across its app and online content, while he was a college student after OCD symptoms began disrupting his life. There are an increasing number of apps focused on mental health, but Smith had trouble finding one that gave him the specific support he needed.

“I was suffering pretty intensely with OCD and mental health apps out there didn’t address OCD specifically. They addressed cognitive behavioral therapy in general, but they didn’t go deep enough. I couldn’t implement treatment because treatment for OCD is very specific,” Smith says. “I wanted to create something that would provide effective treatment and also give users a community and 24/7 support.” 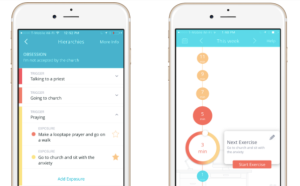 After taking a break from college to focus on nOCD, Smith returned to school at Pomona College. Before graduating last year, he commuted between its Claremont, California campus and nOCD’s office in Chicago.

The lifetime prevalence of OCD among American adults has been estimated to be about 2.3% and the World Health Organization has described it as one of the most disabling conditions because of OCD’s impact on work and quality of life.

Even though it’s effective, ERP therapy can be difficult to find and hard to afford. nOCD was created to address barriers to treatment, like not getting enough guidance outside of medical appointments (which can cost hundreds of dollars per session) or confusion over how to complete exercises. Its users can also track their progress in the app, share access to that information with healthcare providers and connect anonymously with other OCD sufferers for support.

nOCD’s seed round brings its total raised, including angel funding, to $1.25 million. The app is currently available only on iOS, but its new funding will be used to develop a version for Android. The startup also plans to add more features based on user feedback, including tools that make ERP easier to understand for people who haven’t tried it before. It recently added Larry Trusky, who previously served as vice president of development at Allscripts and chief technology officer of Zest Health, as its new CTO and chief operating officer.

While many self-help mental health apps have launched over the past few years, nOCD might be a precursor of the genre’s future, in which startups create resources tailor-made for specific conditions.

“Most mental health conditions need specific treatment, not just OCD,” says Smith. “It’s not unique in that sense, but the tech industry tends to condense them into one. Our platform treats patients in the middle of an episode. They hit an SOS button and get exposure and response prevention-based support. The whole principle is to accept uncertainty and if you can do that, obsessions and fears decrease in frequency over time.”