Today onstage at Code Media, Facebook’s head of news partnerships, Campbell Brown, said that publishers wanted to give away five free Instant Articles, not 10, so Facebook is switching to that lower threshold as an option before asking users to pay, and that includes bringing the test to iOS.

“We’re working now on a subscription product that we’re moving forward with on iOS on March 1st, which is a breakthrough. We had a hold-up there.” Asked to clarify what changed with Apple, Brown said “It’s resolved.” 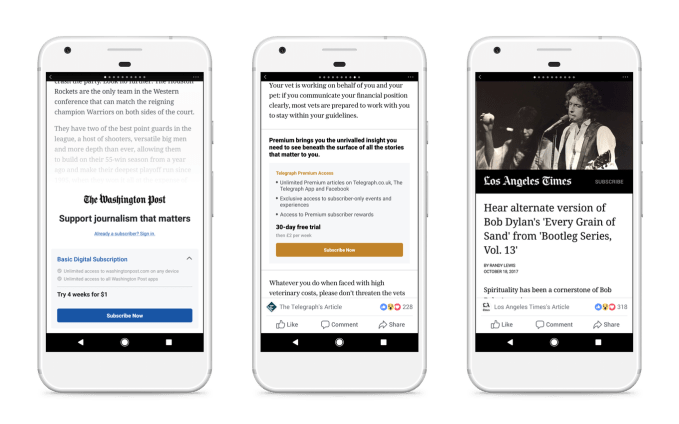 On Android since October, when users run out of free articles and hit the paywall, Facebook has opened a special publisher subscription page within Instant Articles in Facebook’s app, where customers complete the subscription transaction, and publishers keep 100 percent of the revenue. That’s despite Android usually charging 30 percent on subscriptions bought inside native apps.

On iOS thanks to the new agreement with Apple, when a user runs out of free articles and would hit the paywall, Facebook tells me it will load the subscription page on the publisher’s mobile website instead of in Instant Articles. Publishers will get to keep 100 percent of the subscription revenue and the customer data, while Facebook charges nothing and the mobile web workaround circumvents Apple’s standard 30 percent fee on subscriptions.

This means Facebook is getting a sweetheart “deal” to pass on to publishers because normally Apple forbids apps from including links to their subscription checkout pages to bypass the 30 percent tax. Facebook tells me it’s not paying Apple anything for this. Instead, it says that since the mobile web subscription page auto-loads after you run out of free in-app Instant Articles, you technically never click a link out to the subscription page in the way Apple forbids.

“This was something that Facebook wouldn’t even consider for a long time so it’s an important step,” Brown said. “We’ve made some changes. We’ve lowered the meter to five articles before you hit the paywall. I’m super excited about the potential here.”

Backing up that claim that this is a serious strategy shift, Digital Content Next CEO Jason Kint said Facebook told him paywalls would interfere with Facebook’s data and ads business:

I can confirm that one month before @campbell_brown showed up I was told by a Facebook exec they would never consider subscription models as they create friction and are antithetical to Facebook's biz model (data collection + microtargeted advertising). #CodeMedia https://t.co/qVanGQVhjB

Brown also announced that Facebook is creating a dedicated section for news on Facebook’s original video programming hub Watch. She explained that it’s strange that there’s no dedicated place to go for news on Facebook, and this will fill that gap, giving Facebook a place to highlight breaking news when important things happen. Meanwhile, she says that Facebook could have better communicated ahead of its terrifying test that removed all news from the News Feed in six countries.

When asked about whether Facebook would consider paying publishers directly for their content like television channels, as suggested by News Corp’s Rupert Murdoch, Brown laughed, but concluded that she’d “never say never.” She also mentioned that her job is to get accurate and informative news on Facebook, not to make every publisher on Facebook happy.