Amazon’s Echo Look may not be the best-selling device from the Echo lineup of Alexa-powered smart speakers, but those who purchased the camera/smart speaker combo likely have a high interest in fashion, accessorizing, and shopping. That’s why Condé Nast’s Vogue and GQ are now working with Amazon to insert fashion recommendations into the companion app for Echo Look users, some of which will be shoppable.

The news of the tie-up was first reported by Digiday, which noted that the integrated content will arrive later this month, on February 19.

This is the first time that Amazon’s Echo Look has partnered with publications to add content to the Echo Look’s app.

More importantly, the experiment could also serve as a test of whether or not fashion recommendations delivered through an Alexa-powered experience could lead to increased sales. That’s something Amazon could later incorporate into its other Echo devices – like those with screens instead of cameras, such as the Echo Show or Echo Spot.

The Condé Nast-powered feature, however, will not be available on Alexa itself, as the Echo Look only has a camera, not a way to display content.

Instead, the fashion suggestions will appear in the Echo Look mobile app, where today Look users save photos and videos of their outfits, and ask Amazon’s in-house fashion stylists for personal fashion advice on what looks better.

According to Digiday, this app will be updated to include “fashion, celebrity or service content” from Condé Nast titles, some of which will be shoppable. If Echo Look owners click to buy an item, the publisher will also receive a cut of the sale. However, Amazon is not otherwise paying Condé Nast to participate. 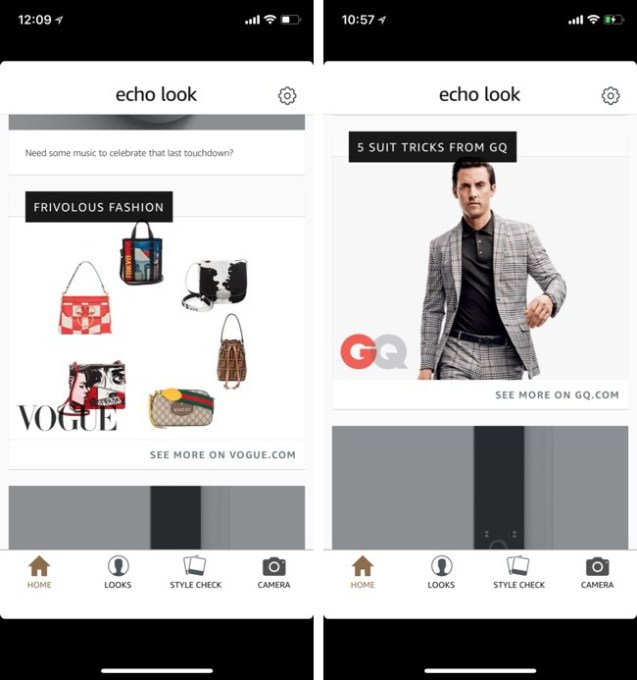 It’s estimated that there may be as many as 31 million Alexa-powered devices on the market, but the Echo Look is a small percentage of those. In addition to the original Echo’s popularity, which helped Amazon gain market share, the Echo Dot has been a consistent best-seller on Amazon’s site thanks to its low price. Meanwhile, the newer Echo Spot also sold out over the holidays.

The Echo Look, on the other hand, has only niche appeal – it has always felt more like an experimental product meant to test whether or not Alexa would make sense paired with a camera. And unlike Amazon’s other Echo devices, the Echo Look can only be bought after asking for an invitation. Amazon doesn’t say how many of these it has sent out.

However, if the tests with GQ and Vogue are successful, Condé Nast may consider making content for Echo Look owners specifically. But even if the tests don’t lead to a longer-term partnership, the publisher will have learned more about what works in terms of driving sales by way of its fashion content, which could help it with e-commerce initiatives in the future.