Akamai, the Cambridge Massachusetts content delivery network and network services provider, announced they had laid off 400 people in their earnings call with analysts yesterday.

On the call, Akamai CEO Tom Leighton indicated that the 400 people represented 5 percent of the company’s 8000 worldwide workforce. “As part of our effort to improve operational efficiency, we reduced headcounts in targeted areas of the business, most notably in areas tied to our Media business. Overall, we have removed about 400 positions or 5% of our global workforce,” Leighton told analysts.

He went onto to say that the layoffs actually began at the end of last year and have spilled over into this week. The company sees this as part of an effort to get leaner and cut costs, an effort that predates Elliott Management buying a 6.5 percent stake in the company in December.

Elliott has a history of being an activist investor and a reputation for pushing companies to make big changes. In this case though, it appears the company was trying to find ways to reduce costs even before Elliott entered the picture.

A company spokesperson added, “The reduction in workforce is one part of a series of decisions to reduce cost as we continue to invest in areas to position Akamai for long-term success.”

This is a point that Leighton also made as he tried to temper the layoffs with news that the company plans to invest in other areas “It’s important to note that while we’ve made reductions in some areas of the business, we are also investing in areas that can return greater value going forward,” he said. These include areas like security and Internet of Things, markets that are still developing and there is room to exploit.

The company actually had a decent quarter, beating analysts expectations with revenue rising 8% to $663 million. The company stock is up $4.65 this morning or 7.30 percent, as of this writing. 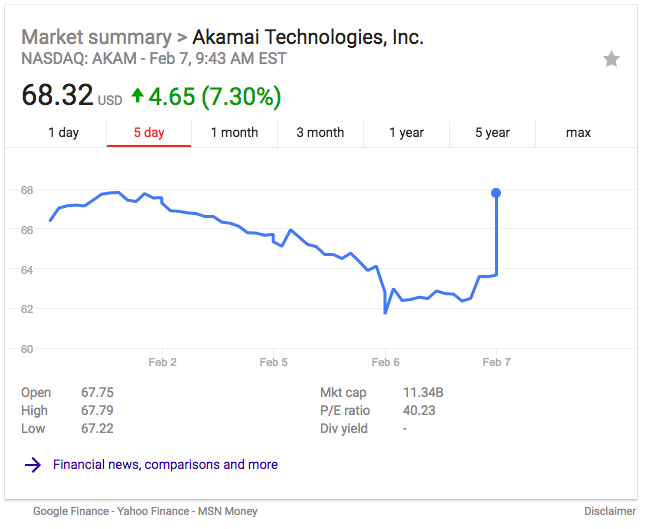