Agrilyst, a platform that makes it easier for indoor farmers to manage their crops based on sensor data, today announced that it has raised a $1.5 million funding round from iSelect Fund, Argonautic Ventures, Horizons Lab (Horizons Venture’s seed fund) and Onlan Capital Fund. The new investors were joined by existing investors Compound and the New York State Innovation Capital Fund. That’s on top of the $1 million round Agrilyst announced in 2016.

As Agrilyst co-founder and CEO Allison Kopf tells us, the company, which won our Disrupt San Francisco Startup Battlefield in 2015, has been on a bit of a roll lately. It added 100 new customers in 2017 and saw 500 percent growth in both revenue and customers since 2016. Its service is now available in 10 countries and its tools support more than 50 vegetables and 800 crops. 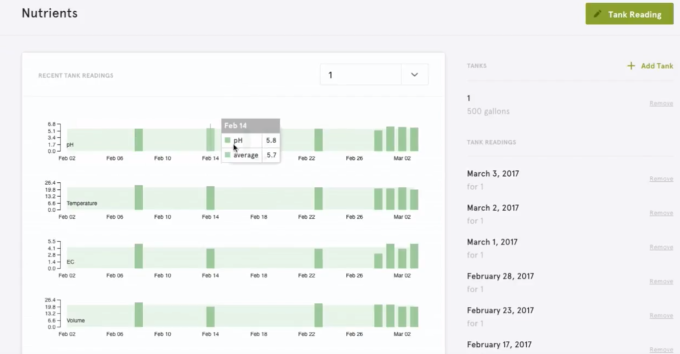 When the company launched, the team was very adamant that it didn’t want to be seen as a tool for indoor cannabis growers, but it recently added support for cannabis, as well as for floriculture and insect productions.

“We see a world where computation cost is driven to zero and we now have the resources to monitor the growth, health and biology of every single seed,” says Phil Chen, advisor at Horizons Lab. “I see Allison and her team at Agrilyst as the interpreters of this data to secure future food sources.”

As for the team, it’s worth noting that the company recently brought on both a new CTO (to replace co-founder and CTO Jason Camp, who left the company last year) and a VP of Customer Success.

Unsurprisingly, Agrilyst plans to use the new funding to support its growth and expand into new markets and product lines. Having a number of new investors that focus on the large Chinese market (Horizons, Argonautic and Onlan) will surely help the company expand into this market, too.