The team at SocialRank has spent the last few years building ways for brands and marketers to get a better sense of who’s following and engaging with them on social media. Until now, they’ve been doing that on an account level — plug in an account and you get a SocialRank report covering things like your most valuable followers.

With a new product called SocialRank for Content, the company is applying a similar analysis to tweets and Instagram posts, giving users data around who engaged with each piece of content and when.

Co-founder Alex Taub said that while SocialRank provides similar data around Twitter and Instagram, he imagines that the use cases will be different on each platform.

On Twitter, it becomes a way for users to see why a certain tweet took off. In other words, if you don’t have millions of followers already, and you post something that suddenly gets thousands of likes and retweets, it can be tough to reconstruct what happened. (Or so I’m told: Sadly, I’ve never experienced this myself.) Was it because a specific person retweeted you?

With SocialRank for Content, you’ll actually see a timeline showing the level of engagement for your post. So if there’s a specific inflection point when things took off, you can see who retweeted you then and functioned as the real springboard for your tweet. 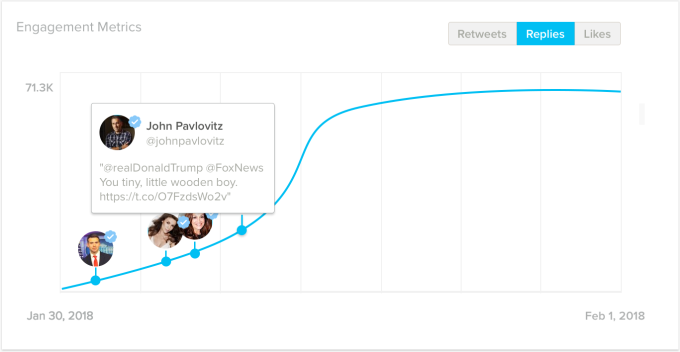 Now, if you’re not someone who’s thirsty for retweets, this might all sound a bit frivolous. But if you’re a marketer who needs to get more followers and more engagement, this data could focus your efforts — if there’s a user who’s been particularly effective at promoting your content, then you know who to ask for help next time.

On Instagram, on the other hand, Taub suggested that this could be a used as a tool for comment management — rather than wasting your time replying to every comment, you can see which comments you should prioritize, based on the following of the person who posted them.

Taub also argued that this analysis is particularly important at a time when there’s growing scrutiny over fake followers. To be clear, this isn’t a tool for finding those followers (that’s something SocialRank is working on separately), but it does help marketers find the real engagement that actually leads to more engagement.

SocialRank is currently beta testing the product with a limited group of users. Taub said one aspect that’s still being experimented with is pricing, though the basic idea is that you’ll pay based on the number of tweets or posts you’re analyzing.