When Jason Chen first ended up at Salesforce through the acquisition of his last company Stypi, he had the tough task of integrating within Salesforce’s complex infrastructure — and not a lot of documentation to go on.

Fortunately, Chen’s company had just been acquired and he was able to get the attention of the higher-ups and find that information, which was actually buried within a document internally somewhere. But not every team might have that buy-in to get the attention of the right people right away, and as companies get bigger and bigger it becomes more difficult to track the most important information internally. That’s why Chen and his cofounders decided to start Slab, a company that’s looking to build a better way to store company knowledge internally. Slab today announce it has raised $2.2 million in a new financing round from NEA, Charles River Ventures and Matrix Partners.

“That’s one example of the problem where the information’s actually available, but it’s kept in silos,” Chen said. “Even the products themselves have primitive search capabilities. If we weren’t acquired founders and didn’t have access to high level execs our project probably would have failed. Day-to-day it’s a common statistic that knowledge workers spend 19% of their time looking for information, and even more with emails and meetings trying to find it — and that’s if they succeed to do this.”

Building a next-generation internal wiki might not be the most exciting problem in the universe, but it’s one that Chen and his cofounders Chengyin Liu, Anvisha Pai, and James Hsi, have all felt — and it’s one that companies definitely feel as they get bigger. Imagine a situation where the entire team that built a product is no longer at a company, but it is now on-boarding new employees to maintain that product. Having that information easily accessible is critical, which is part of the reason why Chen was also able to get the attention of investors. 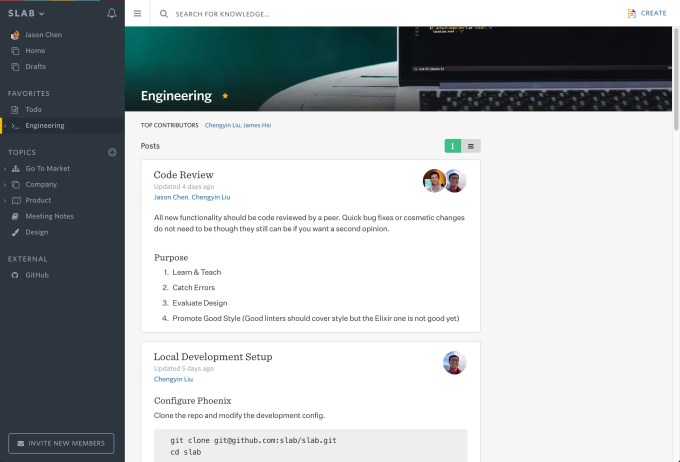 Even though all of a company’s core information might not go through Slab manually, the service still aims to turn everything into a searchable database to finally find the answers employees are looking for. The goal is to plug the service in and immediately offer a home for employees to find answers, whether that’s from information entered directly through Slab’s core tool or something that’s redirected to a Github page somewhere. The company is starting off targeting product engineers, where having the correct documentation and up-to-date information is often times seen as more important than many teams.

“At a certain point a team’s ability to coordinate and share knowledge and information and retain it defines their competitive advantage,” Chen said. “This is a huge thing they’re missing out on. I do think that if this is done, if we are successful in any part, we’d make companies more competitive.”

At the end of the day, it’s a tool to create some documents that string together into an internal database of information. There are of course challenges to figuring out what’s working or not. For now, Chen and his team have to lean on their existing user base, which the company is attempting to grow methodically as it starts to figure out the best use cases and fit it to the right user behavior. Someone searching several times and leaving the page, for example, might mean they are coming the service and using it a lot and just not getting the right answer. So for now, part of the trick is connecting with customers directly and trying to resolve the best path to take from there. 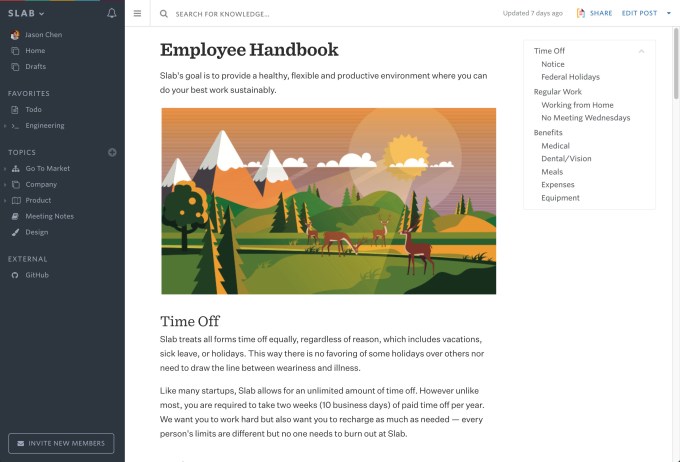 If there were any indication of how much interest there is in the space, it’s the increased interest in collaborative note-taking documents. There’s Dropbox Paper and Google Docs, which easily serve as hosts for information that users can share amongst themselves. (Slab, too, offers a tool to link out, which produced a weird use case where users were publishing content, Chen said). There’s Coda, which is looking to re-invent what a document looks like in 2018, which could change the way collaborative note-taking behaves going forward. And there are also startups like Slite, which are looking to remake tools to build those internal wikis.

Despite all this, Slab hopes to get the buy-in from teams as it grows beyond just that word-of-mouth seed where many startups get off the ground with that focus on ease-of-use that Slack made popular in Silicon Valley. As companies get bigger and more hectic, and can’t find the time to build these internal databases, Chen hopes Slab can find its way into those small teams and grow into a system that will offer some kind of value.