Every day we encounter bugs in mobile apps. They may lock up or perform in a way we didn’t expect, but what if you could report the bug to developers as it happened with all of the contextual information they need to fix the problem? That’s what Buglife a member of the Winter 2018 Y Combinator class is trying to do.

The founders, Dan DeCovnick and Dave Schukin, came up with an early iteration of the idea in 2011 while both were working at Amazon developing a music player for the iPhone. They found while beta testing the software that people would run into problems like music not streaming in certain situations, and would email them. But they lacked context about what was happening on the phone when the problem happened.

They needed to know more to solve the problem such as the phone type, the OS version and the underlying log data. They built some elementary tooling while at Amazon to help capture that data, but the same problem popped up at subsequent jobs at Yammer and Twitter, and he said he kept seeing the same reporting hole.

They launched Buglife in 2016 to productize their bug reporting tool idea. They joined Y Combinator last month. The way the service works is that developers embed the Buglife SDK in their iOS or Android app. When a user encounters a bug, they can simply shake the phone, or the developers can choose different a way to enter the Buglife workflow. Then they can take a screenshot, draw an arrow to the bug and a enter a note about it. Buglife captures all related information like capture logs, network info and routes it to Jira or Slack to provide developers with rich bug reports in the reporting tools they are used to using. 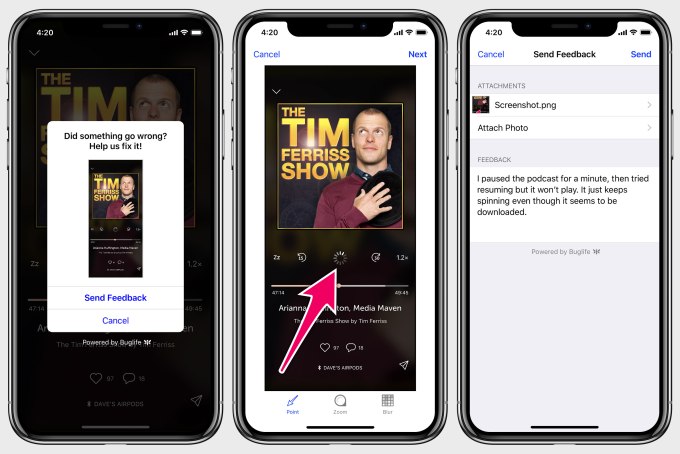 Shukin says they originally saw the tool as a way to report bugs when they were testing the app in-house before the release, but they have found when they put it out in the world, developers have been using their tool on live apps in the app stores too.

He says the big difference between his company’s product and ones like Crashlytics or Bugsnag (a company we recently wrote about), is that they are more an attempt to automate the QA process. Schukin said that Buglife is more about user feedback/crowdsourcing the types of bugs which are difficult to automate.

If you’re worried about the privacy implications of taking a screenshot and sending it to developers, Shukin says they have set it up, so that sensitive data like phone numbers and credit card numbers will be blurred out when the screenshot is taken.

The company is reporting some good early traction with some 300 apps embedding their bug-reporting SDK. They charge on a per app per month basis with a free pricing tier for indie and open source developers. They have an enterprise pricing level to help companies with more complex integrations.

The two founders are the only employees at the moment and they felt that joining Y Combinator was a no-brainer. As a couple of engineers, they can get guidance on the intricacies of running a business. “For starters, [it’s helpful] just being connected to a lot of founders and getting advice from them and hearing about their experiences building similar companies,” Shukin said.

“I have plenty of friends to ask coding questions, but nobody to ask how do I negotiate a contract or deal with hiring. Having access to those resources has been huge,” he said.

As for the future, the company wants to be the solution for developers to collect mobile app bug information from the world. “We want to be the focal point where teams can easily collect all possible data and context of where the user became frustrated or was having problems and intelligently provide all of that data for developers without having to jump through hoops with customer support.”