If you’ve ever tried to collaborate on a document (or any kind of note, really) with coworkers or anyone else, you’re probably using something along the lines of Dropbox Paper or Google Docs — but they don’t quite have the same team-focused simplicity as, say, Slack, if you ask Christophe Pasquier.

That’s where Slite, a new notes tool that’s specifically geared toward team usage, comes in. Started about a year and a half ago by Pasquier and his team, Slite wants to rethink what a simple notes app looks like where teams can come in and create documents that they can share amongst themselves without having to send links around to each other. Think of it as a new way to mark up a company onboarding manual or an internal contact list. And taking a note from Slack’s playbook, Slite is specifically designed to ensure that its tools remain simple and solely focused on teams. Slite is launching out of Y Combinator’s winter 2018 class.

“While Google Docs and [Dropbox] Paper are customer-facing documents, they aren’t easily maintainable — you can’t [easily] know who did what, you never open something unless someone sends you the link,” Pasquier said. “You think about the permissions mess it causes. What we do is say, this will never be used by non-tech, non-product people, and we want to make it incredibly simple. We just take it as simple as a note.” 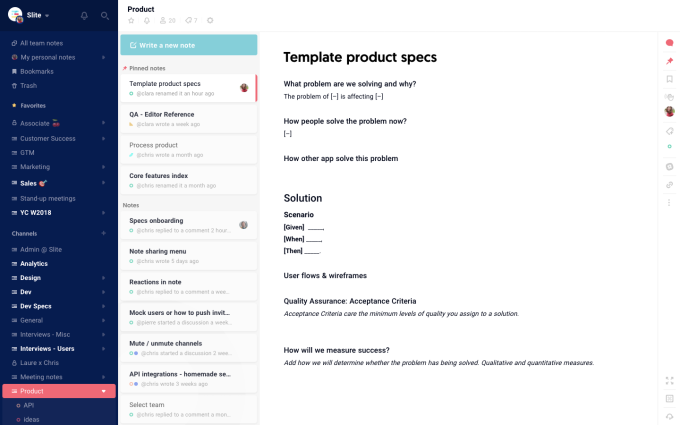 If this sounds a lot like an internal wiki, that’s probably not a terrible comparison. But while many teams may have to Google Docs or Dropbox, or something along those lines, there’s a good chance that companies don’t have some kind of strict system in place to keep track of all this information internally, especially for younger (and maybe more chaotic) companies. The idea is to turn the concept of just taking notes and sharing them into something that’s strung together as an internal lexicon of information for a company that every employee needs. And on top of that, Slite keeps track of who did what and allows for mentions and comments, making that system a little more robust.

Part of the problem came from ensuring that teams were checking these kinds of notes or documents on a regular basis, which sometimes became an issue if people weren’t sharing the links around as a reminder, Pasquier said. To be sure, you could easily pin a link to a Google Doc on top of your Slack channel or stick it somewhere that’s really obviously noticeable. But part of the appeal of Slite, Pasquier hopes, is that employees will automatically know where to go to find the kinds of notes they are looking for that companies have put together internally (like notes from a meeting or a stand-up). 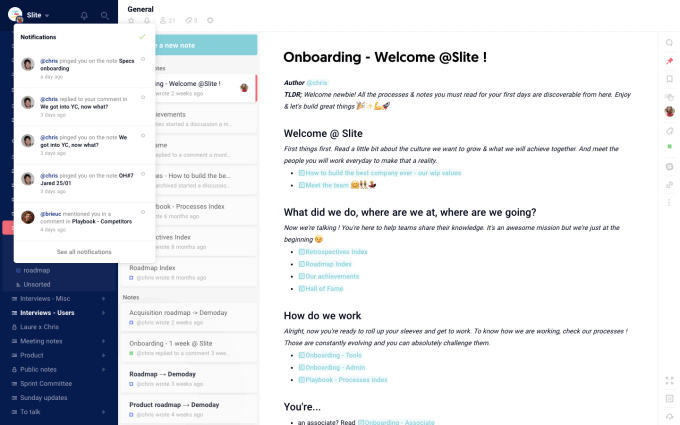 And it already seems to have some applications that would go beyond team members trying to put together just an onboarding manual. For example, the could serve customer success teams at larger companies as it could serve as a hub for company updates and keeping the team up to date — whether that’s with what’s in progress, or known bugs, or anything along those lines. Having that in one single searchable database gives those teams a place they know where to look to find that information, as well as figure out who wrote what and ping them when they need additional information.

Still, while Pasquier tries to distance the company from the comparison to Google Docs and Dropbox Paper, those comparisons still aren’t that far off. Paper, for example, may find some use as a kind of continuous product development document that teams use to keep track of where a project is heading into its launch, and that includes all the little tools that you might find in Slite like tables. And then there are startups like Coda, which is looking to completely rethink the way word documents should exist. At the end of the day, though, Pasquier says by focusing on a vertical they think they can chip away at, they’ll have a shot at growing into something more robust.

“Slack is perfect for synchronous communication, but it’s a mess for asynchronous communication,” he said. “You will exchange on Slack, but when it comes to permissions and other things that matter, it will be in Slite. It’s really like the simplicity of the UX [for an app like notes] is just a game changer when it comes to writing things that matter. It was that conversation that made it obvious that it was a topic to tackle.”