Just about every startup has aspirations to be a platform play. One of the main issues companies typically face on that journey is that just because they build an API doesn’t mean developers are going to adopt it. German API startup CloudRail wants to help.

It not only provides a set of tools to simplify implementing your API, but also offers a marketplace and a community of developers ready to use it. Today the company announced a €540,000 ($672,138 USD) seed round. It was the second seed round for the same amount bringing the total raised to €1,080,000 ($1,344,276 USD) across the two rounds.

Felix Kollmar, a co-founder at CloudRail, says they started the company working on an entirely different project, but came up with the API management idea while trying to solve their own API integration problems. “We had those integrations problems and solved that internally and realized that the pain we solved internally was a bigger pain and other [developers] felt the same,” Kollmar told TechCrunch.

They got the first seed round in 2014 and used that to build the product and bring it to market. That involves a number of approaches. It starts with bundling similar program types together into a single integration such as a storage bundle with Box, Dropbox and OneDrive. The service is delivered as an SDK that the developer embeds inside their application. Developers can try different integrations in the CloudRail marketplace. 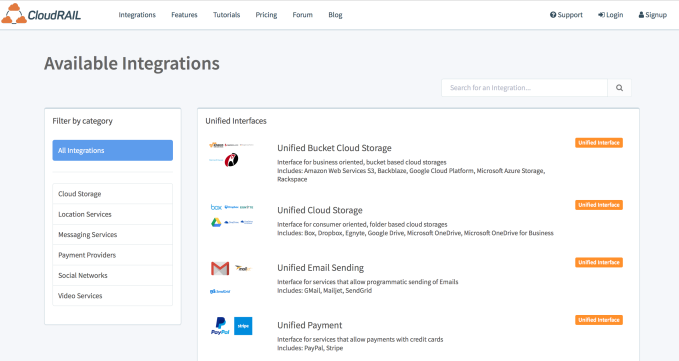 Finally, providers can track how well they are doing in the community via an analytics page.

Today, CloudRail offer a range of integration services, mostly free for developers. Kollmar wouldn’t say how many developers are using the platform, but did say that 50-60 million end users have touched the platform through their integrations. Instead of asking the developers to pay, they are charging the company offering the API for access to their marketplace and a developer community to sell their APIs.

Many companies offer API access to their services separate from the application itself including social, payments, storage and messaging to name a few. For instance, a company like Box could offer storage or content security services, which developers could then embed in their applications with a few lines of code, saving them the time and effort of building it themselves.

The company also has plans to  expand into the Industrial Internet of Things, a world of integration, which Kollmar says was previously separate from IT, but he sees coming closer together. “We are seeing those two worlds coming closer together and developers in Industrial IoT now have to deal with APIs, and they are struggling with that,” he said. He sees this as an area that CloudRail could exploit.

Investors in today’s round included Ulrich Turck Family Office and SB Rheinland-Pfalz, who are both new investors along with returning investors Leonardo Ventures, and BWM and several unnamed angel investors.