In the world of mobile apps, numbers come in two sizes: big and bigger.

More than one billion people use Facebook’s mobile app every day. Instagram — another Facebook property — has well over 100 million photos and videos uploaded to the platform every 24 hours. And untold millions of emails, instant messages, small financial transactions and other interactions are facilitated by mobile devices every day.

But what about the financial side of the mobile business; specifically, venture investment and returns? All of that activity should bring in some considerable revenue, and a lot of startups are seeking a niche in this expansive ecosystem. By taking a look at the numbers behind two different ends of the startup life cycle — seed and early-stage funding on one side and exits on the other — a reasonable understanding of the mobile market today can be had.

In doing so, we’ll see just how much money has gone to startups in the mobile sector, and the (often good) returns they generate for investors.

Early-stage venture investment in mobile may be a bright spot

In prior coverage, Crunchbase News explored the performance of U.S. venture funding, and, at least as far as seed and early-stage investment goes, 2017 was not a great year.

At the early stage, which consists of Series A and Series B rounds, deal and dollar volume is down from highs set around 2015. And while we’ve asserted that this trend is widespread, there are bright spots in the early-stage market. Mobile may be one of them.

In the chart below, we display seed and early-stage funding round data for startups in Crunchbase’s “mobile” category group from 2007 through the end of 2017. 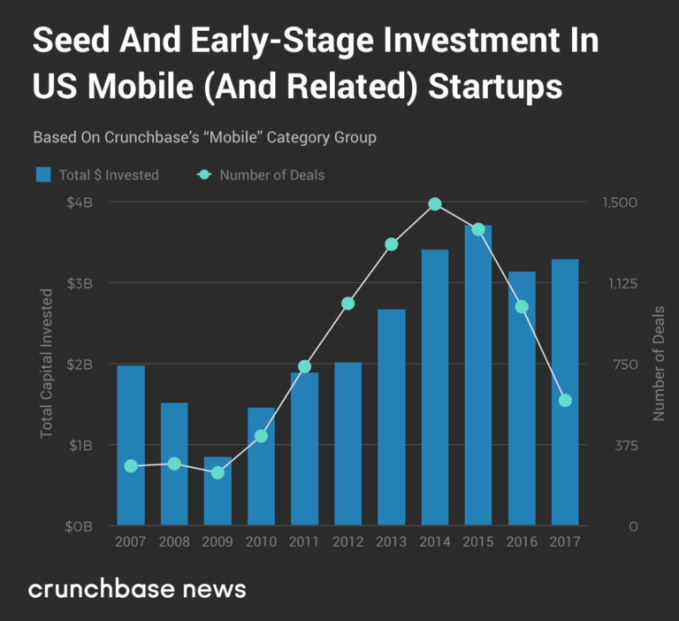 This broad group includes companies in a number of categories, encompassing everything from mobile payments and mobile health apps to iOS, Android and, yes, even Windows Phone and Palm OS. And despite declines in overall deal volume (mostly attributable to reporting delays), the pullback from 2015 highs haven’t been as precipitous as other categories or the market as a whole.

Since 2012, the average seed or early-stage round in Crunchbase’s mobile category group has been on the upswing, according to reported data. 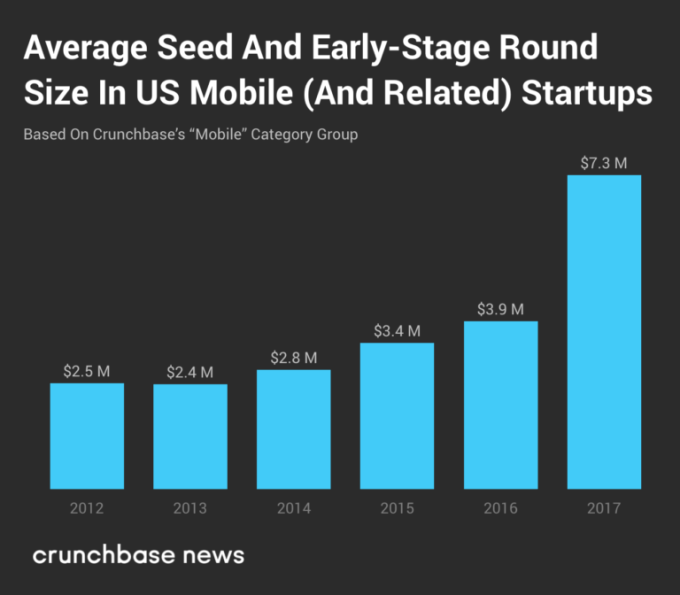 Emerging industries may be driving growth in round size

Part of the increase may be driven by the types of companies that are being funded.

One of the main trends over the past several years is the emergence and growth of mobile-facilitated “sharing economy” services. Sure, most of us are familiar with ridesharing services like Uber and Lyft, but the market has grown to include a much wider array of services.

A vibrant and highly competitive market for dockless bikes emerged seemingly out of thin air, as Crunchbase News has previously covered. Just in the last quarter of 2017, LimeBike raised $50 million in its Series B at a pre-money valuation of $175 million, and China-based Mobike raised an as-yet-unknown amount of private equity funding from LINE, the Japanese mobile messaging company.

Other mobile-focused apps in the sharing economy are gaining traction too. Hyr, a “marketplace that connects traditional businesses with workers to fill hourly paid shifts, on demand,” recently closed a $1.3 million seed round. And at the intersection of “the real world” and mobile, San Francisco-based Omni, which helps its users store and rent out their extra stuff, closed a $25 million Series B in January 2018.

And apart from the sharing economy companies, there’s also been a fair bit of investor interest in enterprise applications designed around mobile. For example, Peerfit, a Tampa-based company that aims to “redefine corporate wellness programs,” raised $10.3 million in a Series B round announced in January. On the cybersecurity front, HYPR Corp closed a $10 million Series A to fuel the growth of its mobile-based biometric authentication business.

On the sharing economy side, it takes a lot of capital to build the supply and demand sides of a marketplace. Meanwhile, enterprise startups have to contend with long sales cycles and stricter requirements from their prospective customers. With a greater prevalence of capital-intensive sharing economy and enterprise startups in the mobile funding mix, it shouldn’t be surprising that the mobile category continues to fare better than others.

The economics of mobile are conducive to massive exit multiples

Venture investors often talk about investing in companies that will deliver a 10x return on invested capital. It goes without saying that doing so, and doing so consistently, is a challenge.

Recently, Crunchbase News surveyed the landscape of large “exits” and found that the life sciences offer a fairly deep pool of opportunities for large exit multiples. But the ratio of valuation to invested capital (VIC) for many of the deals highlighted in that article pale in comparison to some of the multiples to be found in mobile.

Below, we’ve highlighted just a few of the biggest M&A deals, in terms of exit multiples, to come out of the mobile sector. These companies were founded between 2003 and the present, known as the unicorn era. 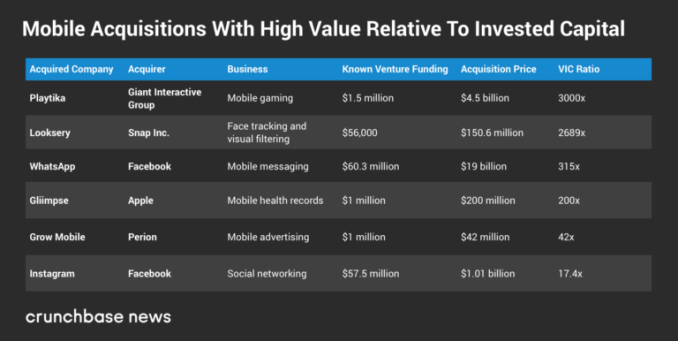 Just like Crunchbase News’s earlier survey of exit multiples found that the mix of tech companies was surprisingly diverse, so too are the businesses in the table above.

However, one company connects two of these deals. Through a series of acquisitions, Facebook repositioned itself from a primarily desktop-based social network to being mobile-first. In the process, Facebook has become one side of a duopoly in mobile advertising. According to financial data compiled by Statista, Facebook’s mobile ad revenue went from basically $0 in 2012 to $8.92 billion by the end of 2017. Desktop ad revenue — some $1.2 billion — remained largely flat over the same period.

Although many believed that the $1 billion acquisition price for Instagram was far too high, Facebook raked in $4.1 billion in revenue from Instagram ads in 2017. Now that’s a multiple!

Why the decent funding and exit multiples?

As shown, the mobile sector produced some exits with very good multiples on invested capital, which is good for investors and entrepreneurs alike. The category also outperforms the general market.

So what makes the mobile category special? A few factors may be at play here. Shifts to more capital-intensive startups are being made. As far as exits go, some of the biggest came from companies with a more traditional software business model, one involving a large up-front investment of time and financial resources to build, but close to zero marginal costs to maintain and near-infinite potential to scale up.

But there is another factor to keep in mind. A few years ago, investors and the tech press were abuzz with excitement about mobile. Now that the fervor over the mobile sector has dimmed in terms of press, more exciting sectors like artificial intelligence, blockchain and others seem to be the center of attention lately. And while that may sound like a bad thing, it isn’t.

It’s not that mobile got any less exciting; it’s just become as common as the air.