Despite worries about Russia and that passive News Feed scrolling hurts us, Facebook beat expectations again in its Q4 2017 earnings report. Facebook now has 1.4 billion daily users, up 2.18% compared to growing 3.8% to 1.37 billion users in Q3. That’s a sizeable slow down, and the lowest quarter-over-quarter percentage daily user growth ever reported by the company.

That could be because CEO Mark Zuckerberg says Facebook made changes including showing fewer viral videos “that reduced time spent on Facebook by roughly 50 million hours every day.” That equates to 2.14 minutes per daily user per day, or 5% of total time spent on Facebook. The viral video changes triggered Facebook’s first-ever decline in daily active users in the US & Canada region, which saw a 700,000 user decline.

Facebook reached $12.97 billion in revenue with $2.21 adjusted GAAP earnings per share if you don’t count a massive tax it had to pay on overseas cash that translated into a $0.77 reduction in EPS. Without that tax, it beat Wall Street’s estimates of $12.55 billion in revenue and $1.95 EPS, but with it reported $1.44 EPS. 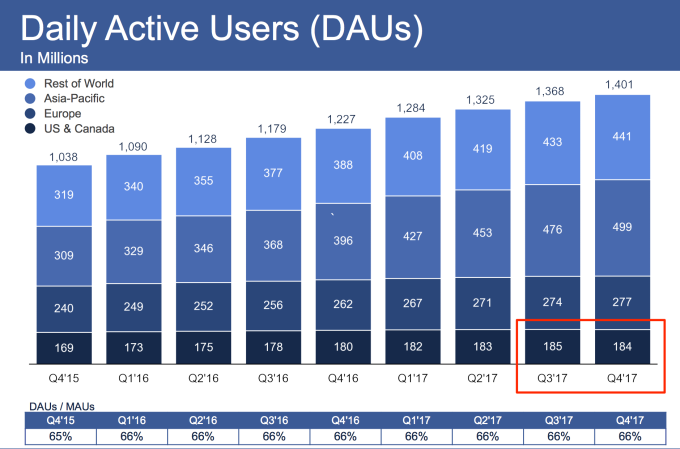 Facebook’s monthly user count is now at 2.13 billion, up 3.39% from 2.06 billion in Q3 compared to 3.19% growth that quarter, so the monthly user growth sped up even as daily user growth slowed. Yet Facebook’s stickiness, or the percentage of monthly users that come back daily, held strong at 66% where it’s been since 2015. That shows people are still avidly returning to the site even if they spend less time there.

Average revenue per user climbed to $6.18, up 27% from a year ago. Average revenue was up 47% year-over-year, even though Facebook has been warning investors that it’s running out of space in the News Feed to put ads. Facebook raked in a record $4.26 billion in profit, down from $4.7 billion the previous quarter due to that big tax. Facebook’s share price was down at first down a steep 4% in after-hours trading, but now is up over 3%. 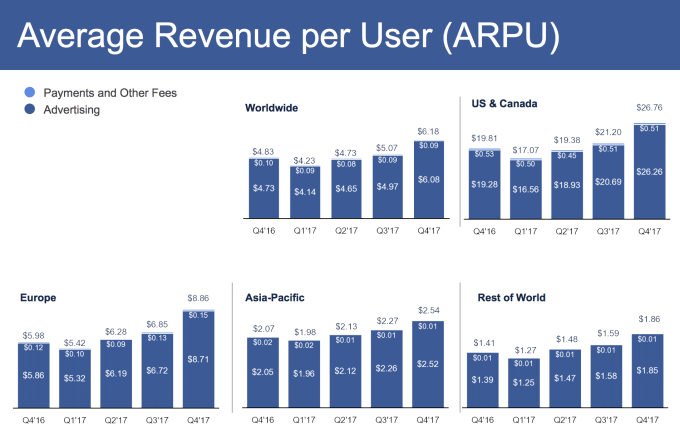 [Updates from the earnings call: Facebook announced that WhatsApp now has 1.5 billion monthly users, up from 1.3 billion in July. It announced a 700,000 daily user decline in the US & Canada due to reducing viral video visibility. Zuckerberg said he’s directed his company to priortize not the most meaningful content, but the content that drives the most meaningful interaction. Facebook’s research suggests total Story posting across apps will overtake feed posting.]

Overall, the results show how divorced Facebook’s user behavior is from the day-to-day news coverage blasting it for allowing Russian interference in US elections and for making us unhealthy zombie browsers. ComScore and Nielsen claim time spent on Facebook per U.S. user is declining, and that showed up in the daily user count growth. And Facebook purposefully made changes leading to its first ever decline of daily users in the US. But Facebook seems to be making up for that in international monthly user growth and squeezing more dollars out of each ad.

With the Snapchat threat largely neutralized via Instagram, Facebook’s biggest enemy is itself. Now it has to work to preemptively disarm any future privacy crises or other scandals, and co-opt the “Time Well Spent” rallying call before it becomes a “Time to leave Facebook” movement.