Spotify is testing an app that sees it move firmly into Pandora’s territory.

‘Stations’ is a new Android-only app that is being piloted by the company in Australia — it was first noticed by app analytics firm Sensor Tower on Tuesday.

This app offers a ‘lean-back’ option to listen to music based on genres and managed playlists. In the description, Spotify explains that it plays music instantly when opened with stations easily changed by scrolling inside the app. Like Spotify’s core service, there’s a personalization element with user-based playlists created once enough music has been played for it to gather data.

The app has picked up less than 100 downloads to date, while it is limited in its support for Android devices, all of which suggests it has only been used by Spotify’s own staff to date.

“We are always testing new products and experiences, but have no further news to share at this time,” was all that Spotify would tell us when we asked. 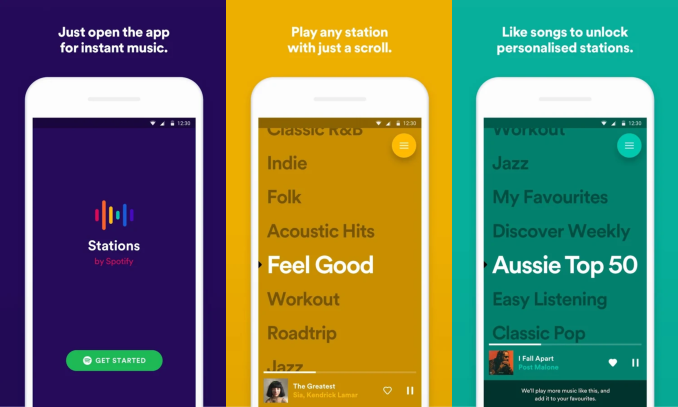 The core Spotify product is a subscription-based music, but there is a free version that lets users shuffle through playlists on mobile and is supported by advertising. The theory is that offering a limited version of the product encourages users to sign up for the full product. You’d imagine it could easily do that with this new app, which has a Spotify log-in button but doesn’t require users to be paying members.

With Stations, the company looks like it has taken an alternative approach by creating a standalone app that offers more direct competition to Pandora.

Pandora claims over five million users. It offers premium membership but the bulk of its revenue comes from advertising — $275.7 million of the $378.6 million that it earned in its most recent Q3 period. Late last year, Pandora boosted its money-making potential by adding video advertising to its mix.

Spotify’s exact financial situation is unclear since the company is private, but it is speculated to be planning to go public potentially as soon as this year. The company has been tipped to opt for a ‘direct listing,’ which would mean going public without doing an IPO. In other words, it is just insiders, not the company, that sell shares to the stock market.

The Swedish company seemed to take a step towards going public when it agreed to a share swap with Tencent Music, which is also reportedly planning a listing.