Instagram copied the ‘Snap’ and now it might be going after the ‘chat’. A video calling feature was spotted in a non-public version of Instagram by WhatsApp industry blog WABetaInfo. It would let users who’ve begun an Instagram Direct message thread to video chat with each other. That could let people spend even more time in the app, but by actively communicating, rather than passively browsing which Facebook has come to admit isn’t good for our well-being.

For now, though, Instagram is refusing to comment. When asked about the feature, a spokesperson told TechCrunch “We don’t comment on rumors and speculation”. That’s different than its more affirmative boilerplate statement given when it does confirm tests of forthcoming features, “we’re always testing new experiences for the Instagram community.” That’s what the company told us earlier this month when we reported Instagram’s partnership with Giphy for Stories GIFs…which launched a week later.

But Instagram already lets people call in via video to each other’s Live Stories like they’re on a TV talk show, and send short ephemeral video clips over Direct. It recently launched a standalone Direct messaging app. And video calling has become one of the most popular features of Instagram parent Facebook’s Messenger app — with 17 billion video chats occurring in 2017, up 2X from 2016.

So given that Instagram has the capability, interest, and infrastructure to add video calling, why wouldn’t it? WABetaInfo spotted the video call button in the top right of the chat screen, with it only available when messaging with people who’ve already accepted your Direct request. 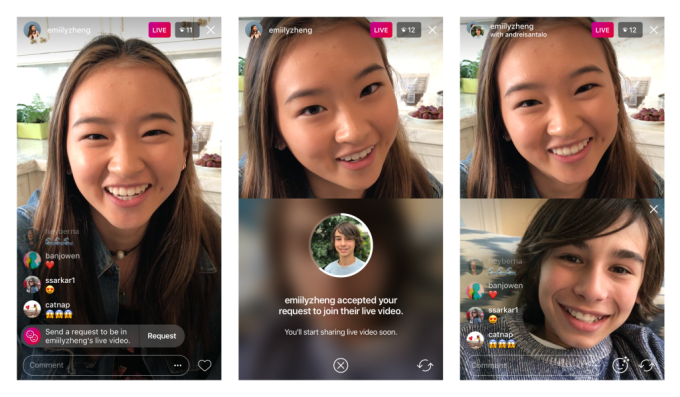 Leaked usage data from The Daily Beast’s Taylor Lorenz outed how Snapchat Stories sharing has stopped growing, in part because of competition from Instagram Stories, but users are still addicted to Snapchat’s chat feature. Snapchat offers audio and video calling as well as photo, audio clip, video clip, and text messaging, effectively making it an alternative to one’s phone itself.

Messaging is the center of the mobile experience, generating the most device opens and time spent. As Facebook tries to shift the behaviors it instills from harmful, zombie-like scrolling to real interpersonal interaction, doubling down on messaging is a clear path. And Facebook’s apps are always hungry for younger users who might not have phone numbers or bountiful mobile plans, and therefore might especially benefit from this new feature.

Now we’ll have to wait and see whether soon you’ll be calling friends on the Insta-phone. Or is it the Phonogram?