The cord cutting trend is having an outsized impact on subscription video apps’ revenue, it seems. According to a new market analysis from Sensor Tower, U.S. consumer spending in the top 10 subscription video on demand apps grew 77 percent last year, to reach approximately $781 million across the App Store and Google Play.

The growth was particularly noticeable in the fourth quarter of 2017, when the top 10 subscription video apps grew 88 percent year-over-year to reach roughly $242 million, up from $129 million in Q4 2016.

This top 10 list was led by Netflix, which also snagged the top spot as the world’s highest-earning (non-game) app in 2017. In the U.S., it grew around 113 percent year-over-year to reach over $290 million by year-end. 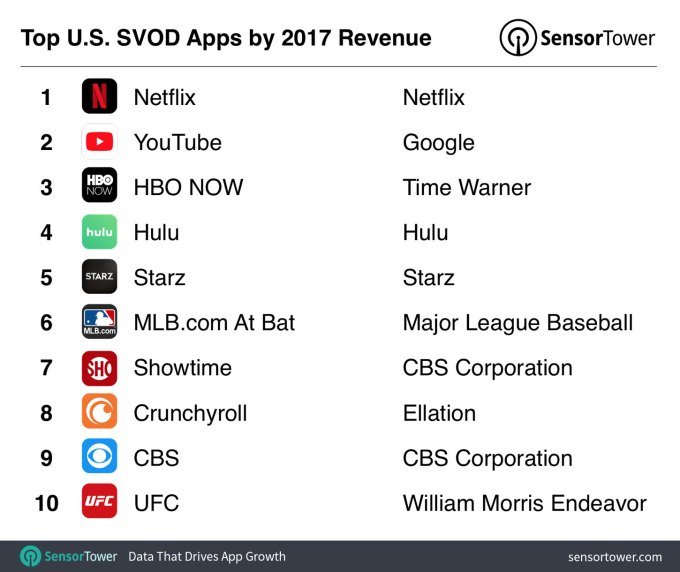 All of the subscription video on demand (SVOD) apps grew their revenue by at least 10 percent year-over-year, the report says, with UFC’s app in last place with 14 percent growth in in-app spending, going from $7.7 million to $8.7 million. Still, even that modest climb is notable given UFC’s appeal to only a niche audience. 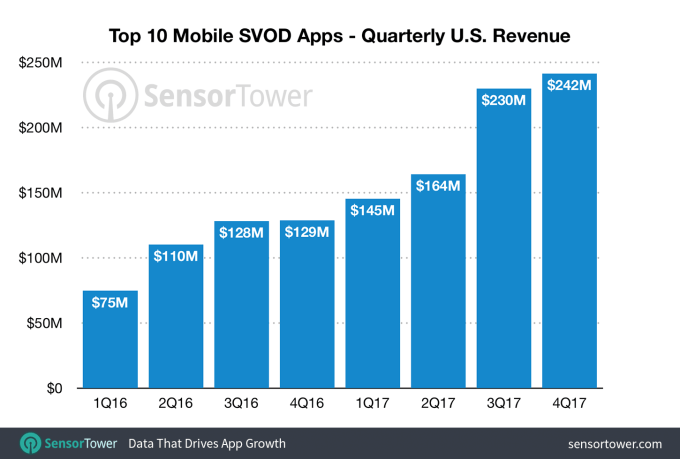 One perhaps more troublesome discovery from the new findings is how dependent these apps now are on their hit series.

In the past, consumers would pay for cable TV – perhaps tacking on some premium channels to have more to watch – and stay subscribed for a long period of time. In the SVOD app world, it seems consumers will sign up for a service to watch a favorite show, then ditch the app when the show ends.

This is most apparent with HBO. Its over-the-top streaming app HBO NOW saw U.S. gross revenue of $67.3 million in Q3 2017, while Game of Thrones was airing its 7th season. (It even had a record revenue day of $2.6 million).

But when the show ended, some number of subscribers dropped off. HBO NOW’s Q4 2017 revenue declined to $53.2 million. Of concern, Game of Thrones isn’t returning until 2019, and HBO hasn’t really found anything of its caliber to fill the void. That could be trouble for the network over the course of 2018, especially in light of the increased spending on content from on-demand rivals like Netflix, which is now saying it will spend between $7.5 billion and $8 billion on content in 2018, for example.

Meanwhile, CBS is currently benefiting from this trend.

In-app spending in its streaming app CBS All Access increased 105 percent in Q3 2017, when Star Trek: Discovery premiered. It grew revenue to around $4.1 million, up from $2 million the year prior. Revenue then jumped again, up 33 percent quarter-over-quarter, to $5.4 million in Q4 2017.

Notably, Star Trek was on hiatus from mid-November through early January, so that speaks to CBS’s app being able to retain users thanks to the draw of its other programming. (The network currently has some of the most-watched shows, including Young Sheldon and Big Bang Theory; plus its app lets cord cutters in select markets watch NFL games.)