Apple is preparing to roll out a new feature in iMessage that will allow consumers to chat directly with businesses through Apple’s messaging platform. The feature, called Business Chat, was announced last year at Apple’s Worldwide Developer Conference, and will debut this spring with launch partners including Discover, Hilton, Lowe’s and Wells Fargo.

The feature will allow consumers to talk to a business’s service rep in iMessage, make payments via Apple Pay, and schedule appointments, depending on the business’s needs.

The move represents a major push by Apple to shift B2C communications, payments, and customer service to its own messaging platform, and away from tech companies that today dominate business messaging, like Facebook Messenger, Google, Twitter, and, as of this month, WhatsApp, which has just launched its own WhatsApp Business app.

While it may seem like an odd fit to chat with businesses in iMessage where people today keep up with friends and family via personal conversations, it’s not surprising to see that Apple is entering this space.

After all, iMessage isn’t often considered the first place you check for business communications, beyond the occasional appointment reminder text or an alert from your bank.

But that could easily change. The demand for business messaging is growing, not only in the U.S., but also in emerging markets that skipped the PC cycle altogether and are joining the web for the first time via smartphones. For them, messaging a business feels as natural as shooting off an email to customer service seems to those of us who grew up with computers.

Plus, a majority of consumers said they would rather message a business than call customer service, according to a Facebook-commissioned study by Nielsen released last fall, which found that 56 percent want to text, not phone. A further 67 percent said they expect more to message more businesses over the next two years.

That said, Apple will not be without sizable challenges as it enters this market, given the size and scale of the platforms it’s going up against with its new Business Chat feature. 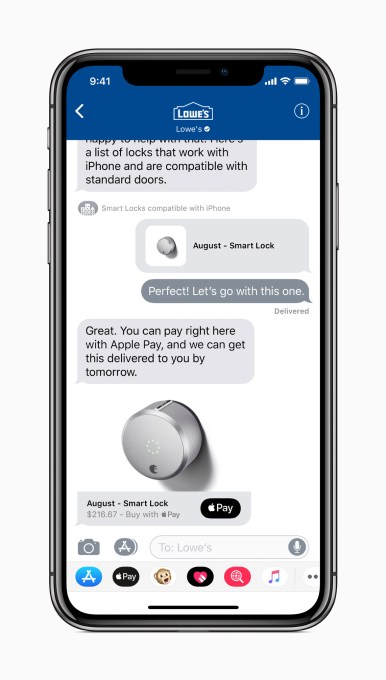 Facebook Messenger, for example, already has some 1.3 billion users on its app, which is connected with Facebook’s wider social network where businesses can manage their own presence, through branded Pages, posts, media, promotions and advertising. Facebook said last year that 80 percent of its then 65 million active businesses were using Messenger to reach customers. It’s also been expanding B2C communications on Instagram, as well – an app that has also begun testing a standalone mobile messenger.

WhatsApp, meanwhile, may have only just entered the space with WhatsApp Business, but its service also has 1.3 billion users and traction in emerging markets, like India.

You also have Google, often the starting place for many people looking to find business contact information via the web, and which offers a similar chat solution through Google My Business.

And then there’s Twitter, a service that has become the de facto place for making general customer service complaints, in the hopes that your angry tweet will be seen by the company and handled. Twitter has doubled down in this area, too, by offering a suite of tools to companies running customer service operations on its network.

Where does that leave Apple’s Business Chat? While it has the benefit of an iMessage install base in the hundreds of millions, it may feel like just one more place to check. And with only a handful of launch partners, consumers may not remember who is available over iMessage and who’s not, so just go elsewhere.

However, Apple does have the advantage of not requiring an app download as iMessage ships with iOS devices. It also has its own built-in payments platform with Apple Pay, which could make transactions easier.

But as Apple joins the fray, its rivals are preparing to do battle. In addition to WhatsApp’s preemptive launch of its business app, Facebook also just added Kenneth I. Chenault, CEO of American Express, to its board of directors. Said CEO Mark Zuckerberg of the addition, the exec has “unique expertise” in areas Facebook is lacking, including “customer service” and “direct commerce.” Sounds like shots fired, Apple.

Apple says Business Chat will launch with the public release of iOS 11.3 this spring.