Yesterday Alchemist Accelerator, best known for working with enterprise startups, held its 17th demo day at the SRI International in Menlo Park, California. Twenty-four startups pitched ideas ranging from personalized genomics to hard tech spinouts from Stanford’s Linear Accelerator.
Rather than expound upon all twenty-four I worked with Alchemist to bring you a top five list of startups that pitched. These startups received the most investor interest at the event and are all poised to do some interesting things in the near future.
Terbine : First Commercial Exchange for IoT Data. Team: – David Knight (2 IPOs, 2 Buyouts); Brian Enochson (AT&T, Time-Warner/HBO); Ben Grossmann (Academy Award for Visual Effects).
Most IoT startups are focusing on devices. Terbine is purely interested in the data. They are aiming to build a commercial exchange for the massive amounts of machine-generated data coming from all the IoT sensors. The team has built scalable transaction platforms in the past, including having authored HBO’s metadata protocol. The city of Las Vegas has already signed up to use their platform. 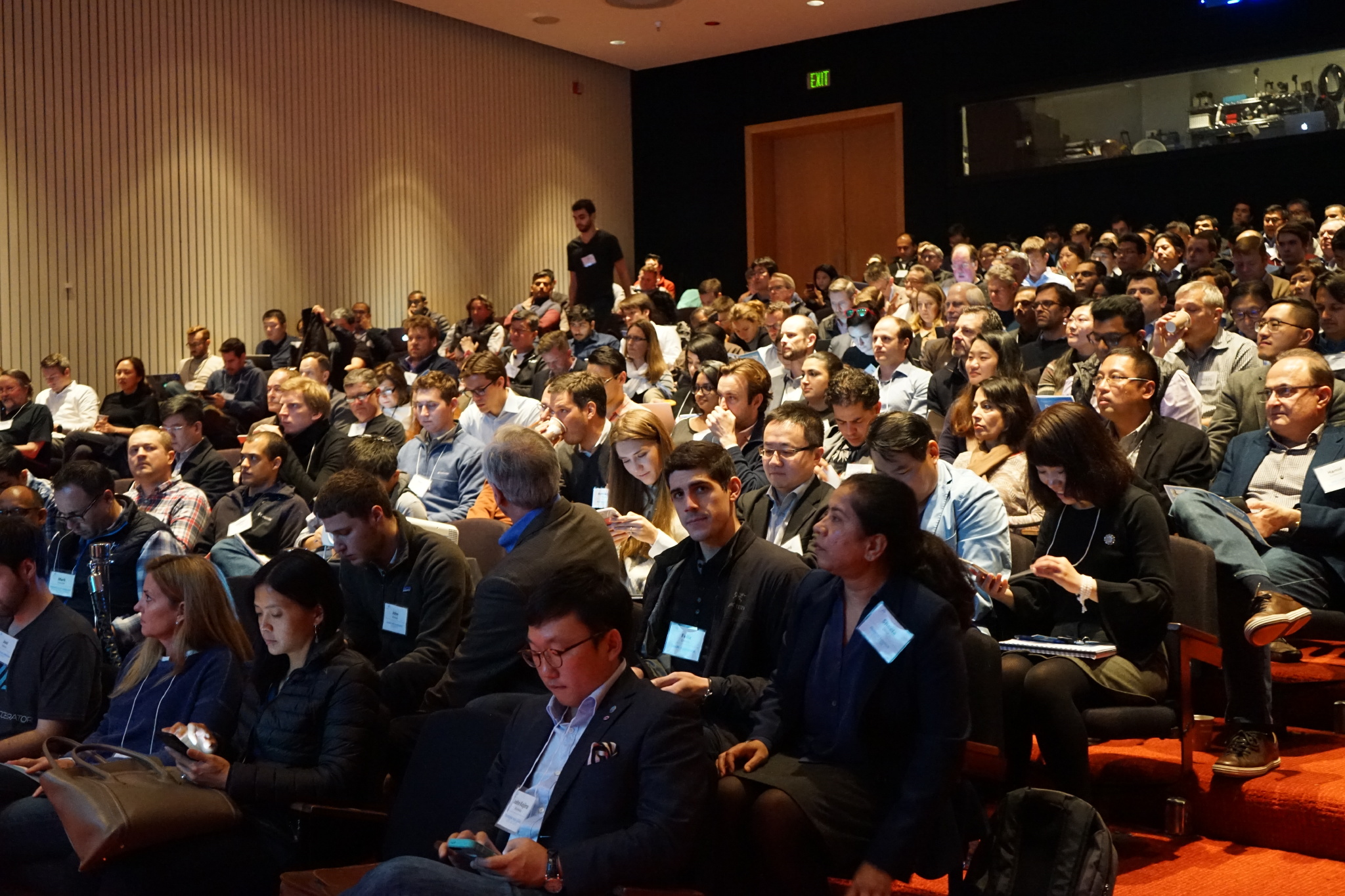 Deep Science AI : Human-In-The-Loop AI Platform for Active Threat Detection Inside of Retail Businesses and Public Spaces. Team: Sean Huver (PhD Physicist, veteran of DARPA projects), Sam Tkach (CS Columbia).
Human monitoring of security cameras in retail outlets is too expensive (and not a fun job). Deep Science thinks computers can do a better job, and for 1/10th the price. Retail outlets with poor security are targets of repeat attacks — gas stations with reputations for poor security enforcement will be robbed every 6 weeks. AI-assisted human enforcement may be the solution, and this team of a trio of engineers from Princeton, Columbia, and UCLA may have the tech to do it.
Quantum Insights : Stanford Linear Accelerator spinout that Finds Hidden Meaning in Complex Data Using Physics and Quantum Mechanics. Team : Marvin Weinstein (Physics, Stanford Faculty), Bernard Chen (VP/GM Scopely and KIXEYE, UCLA MBA).
The deepest tech of the bunch, Quantum Insights is a spinout of Stanford’s Linear Accelerator Center, and includes a Nobel Laureate among its advisors. Using algorithms born out of fundamental research from physics and quantum mechanics, the company can get insight into complicated data sets that other methods can’t see. Big health tech companies like Biogen and Chan Zuckerberg’s Biohub have already signed up to use the tech to discover drugs. And the company has also been getting pinged by Fintech companies for big data applications as well.
Acuity.AI : Software Service that Uses Breakthrough AI-Technology to Enable Commerce through Video by Making Videos Shoppable. RaviKiran Gopalan (Product lead for 10+ yrs in High Tech., PhD in EE, Stanford GSB’17), Charles Han (AI and Computer Vision expert, Stanford MS in EE)
Acuity wants to make videos shoppable. Although this idea has been around for a while, no one has pulled it off yet. Acuity believes it’s because the AI has only now become good enough to pull it off. And this duo founding team — including a Stanford-educated Disney engineer and an engineering doctorate from Qualcomm — may have the technical chops to do it. Chubbies is an early customer and has seen a 35% lift is shoppers adding items to their carts using Acuity’s tech.
Zenith Aerospace : 24/7 Live Earth Monitoring by Solar Unmanned Aircraft Of Perpertual Flight. – Raphael Nardari (Airbus,Cytec,Researcher at Stanford, Experts in Aircraft Strucutre and Advanced Battery), Yitao Zhuang (Intuitive Surgical, Phd In Mech. Eng. at Stanford), Felix Crevier (L3 Tech, MS in Aero/Astro at Stanford).
Zenith Aerospace is developing a 24/7 real-time earth monitoring solution by building a new solar-powered aircraft capable of perpetual flight. Current commercial earth imaging solution using satellites offer a few minutes of observation across a periods of days or weeks. But narrow windows of observation don’t cut it for agencies that need continuous observation — e.g. the FBI or the police. Zenith thinks they have a better and more sustainable solution. The founders built their novel aircraft after stints as Stanford grad students in Mechanical Engineering and Material Science.
Safeskies Systems : Making Commercial Drones Safer. Jesse Williams (Navy Veteran, Caltech, Northrop Grumman, Military UAV Expert); Ryan Mangroo (SW Veteran, NYU Tandon, Designed & Coded ServiceNow Cloud Upgrade System)
The big bottleneck for widespread drone adoption is regulation. Operators of large commercial drones are required by the FAA to prove that their drones won’t fall out of the sky, causing property damage, personal injury, or catastrophic incidents like hitting an airplane. Current approaches to drone safety rely on antiquated parachutes that are too bulky (up to 40% of a drone’s weight) and take too long to deploy (up to 2 seconds). Safeskies is led by a Caltech engineer and military veteran who is using a system more akin to what airbag system’s use to build a solution that deploys in 100 milliseconds, and weighs 30% less than alternatives.