Diane Greene, who heads up Google’s cloud unit, often marvels at how much her company invests in Google Cloud infrastructure. It’s with good reason. Over the past three years since Greene came on board, the company has spent a whopping $30 billion beefing up the infrastructure. Today it announced three new undersea cables scheduled to go online next year.

In a blog post penned by Ben Treynor, vice president of Google’s cloud platform, he announced the three undersea cables along with five new regions. 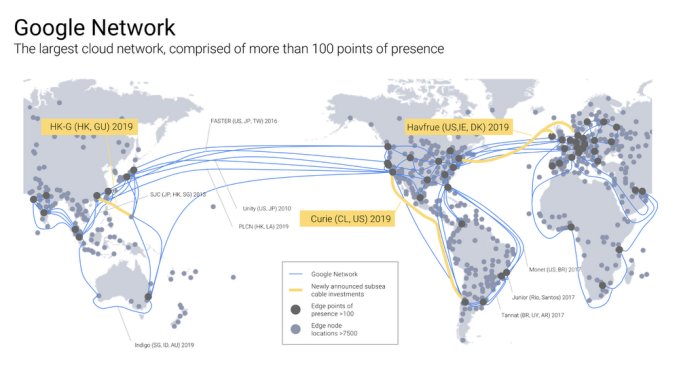 Let’s start with the cables. The Curie cable, named after Nobel prize-winning scientist Marie Curie, is the first intercontinental cable built by a company that’s not in telecommunications. It will run from LA to Chile, crossing over 6200 miles, according to published reports. Google boasts that it will be the first new cable to land in Chile in almost 20 years and will serve Google customers across Latin America.

The second cable, called the Havfrue (Danish for “mermaid”) cable will run from the east coast of the US to Denmark and come online at the end of next year. The last one has the rather unimaginative name, HK-G cable. Google is partnering to build this one with RTI-C and NEC to improve its coverage in the Pacific region. This is a 2400 mile cable that will run from Hong Kong to Guam, according to a report in the Wall Street Journal.

“While we haven’t hastened the speed of light, we have built a superior cloud network as a result of the well-provisioned direct paths between our cloud and end-users,” Traynor wrote.

Google now has a direct investment in 11 under-sea cables and it leases capacity on several others. It announced an undersea cable that runs from Singapore to Australia last spring.

In addition to the undersea cables, the company also announced five new regions including The Netherlands and Montreal coming online in the first quarter this year. Three others in Los Angeles, Finland, and Hong Kong will come online later this year. Google promises they are not done yet and there will be additional announcements of other regions.