Google is preparing to launch a new set of parental control features for users of its Chrome browser. The announcement was made in an email sent this week to users of its current system for parental controls and other restrictions called “Chrome Supervised Users,” which is soon shutting down.

Chrome Supervised Users was first launched into beta back in 2013. The feature allowed a parent to lock down the Chrome browser on a device, including by blocking access to certain websites, enabling SafeSearch for filtering Google Search results and keeping a history of websites visited.

This feature set will now be deprecated, said Google’s email shared with the program’s users.

“Since we launched Chrome Supervised Users in beta preview over four years ago, Chrome and the way we use computing devices have evolved significantly,” the email explained. “We’ve learned a lot in these four years, and heard feedback about how we can improve the experience for you and your children. Based on this feedback, we are working on a new set of Chrome OS supervision features specifically for the needs of families to launch later this year,” it said.

Starting on Friday, January 12, 2018, users will no longer be able to create or re-import supervised users. However, users will still be able to use their existing Chrome Supervised Users on Chromebooks, Windows, Mac and Linux.

The email additionally points users to the newer Family Link parent control solution, which launched to the public in September. This service allows parents to create Google Accounts for their children, then manage their browsing history in Chrome for Android.

However, this solution today only addresses mobile devices, while Chrome Supervised Users was meant for desktop users.

It seems likely that the new parental control features coming to Chrome later in 2018 will be an extension of Family Link to the desktop, but the email didn’t specify this. 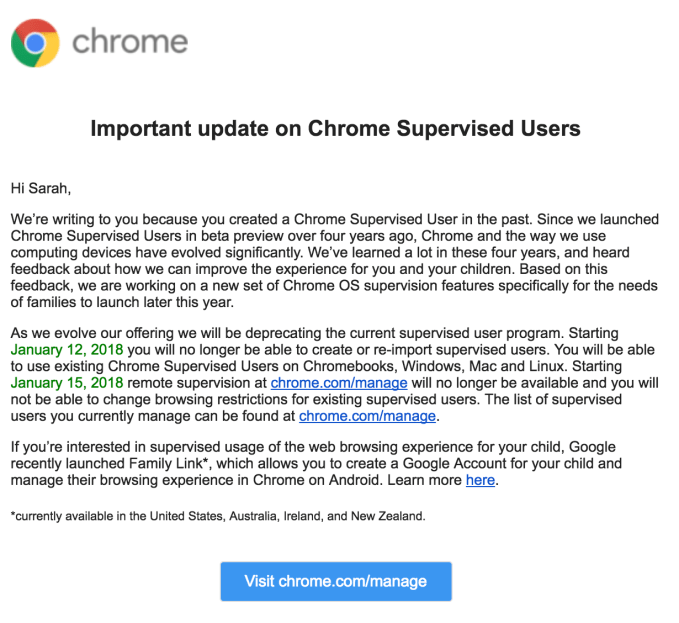