At CES, Petcube is showing off some of its new software technologies for its pet camera system that lets people connect with their pets while away. The company’s line of devices offer a range of options beyond simple remote monitoring. For example, the Petcube Play camera lets you entertain bored pets with an app-controlled laser toy; another, called Petcube Bites lets you dole out treats when you’re away. This spring, these two systems will be upgraded with features that let pets call their parents and send selfies.

Okay, it’s not exactly as if Sparky is going to pick up the phone and then bark in the handset.

Instead, Petcube will use its new technology that differentiates between humans and pets to know when the pet has come into view in front of the wide-angle camera. 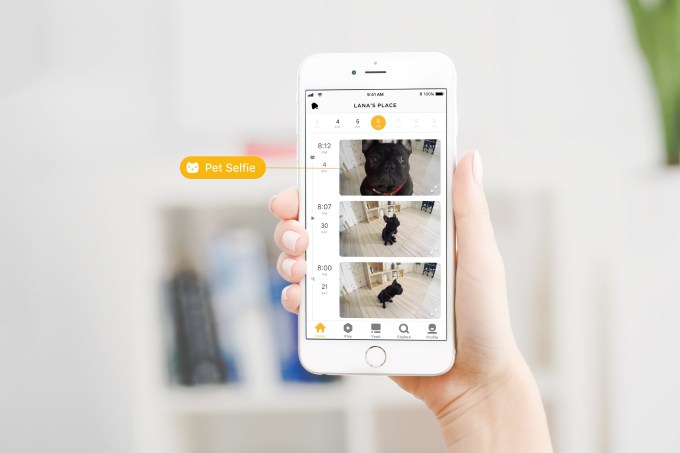 This then triggers a video recording that’s pushed over the web to the app on the pet owner’s device. Really, it’s the same as any basic security camera that’s triggered to record  by movements. But Petcube brands the experience differently. Pet owners can “accept the video call request” from their pet in the app, for example, and preview the accompanying “pet selfie” clip.

This pet selfie will be temporarily auto-saved to the cloud, or can be saved up to 3 to 30 days, based on the optional Petcube Care plan you have. You can also save it to your phone’s Camera Roll, as an alternative. The PetCube app lets you scroll back through past pet selfies and post the clips to social networks.

While products like this may seem silly to some, the drive to treat pets more like children, or at least important family members, is common and growing –  especially as the younger generation is choosing to delay parenthood. Petcube has capitalized on this trend with its $14 million in funding, including a $10 million Series A from Y Combinator and Almaz Capital this past fall, in the hopes that eventually its database of pet recordings could aid in studies of animal behavior. The company, however, isn’t sharing consumer numbers or revenue at this time.

The new features will be rolled out to compatible Petcube Play and Petcube Bites devices on the latest firmware via a software update, starting this spring.