Lost-item finder Tile announced today that it will soon be able to locate your Bose headphones. Starting in late spring 2018, Bose will become one of Tile’s biggest new partners, as it will begin to sell its Bose SoundSport Wireless and QuietControl 30 headphones with Tile’s technology embedded inside.

Existing devices will receive the new feature as a firmware update – the first time that Tile’s software has been downloaded into devices already in users’ homes, in fact.

Once installed, Tile’s app can locate the Bose headphones as it would any other Tile device. You can “ring” the headphones to find them using the app, and the volume will progressively get louder the longer it rings.

Of course, Tile today continues to be best known for its keychain-style square dongles that can be attached to items you want to keep track of – like your keys, purse, bag, bike, wallet and more. But the company’s larger goal has always been to create a global community of users who become the backbone of a distributed network that can be tapped into at anytime to help locate missing items.

To date, Tile has sold 13 million devices, giving it a 90 percent share in the “lost item finder” market, according to NPD. Its community now spans 230 countries and territories worldwide and is used to find over 2 million items per day. Tile also reported $100 million in revenue in 2016. 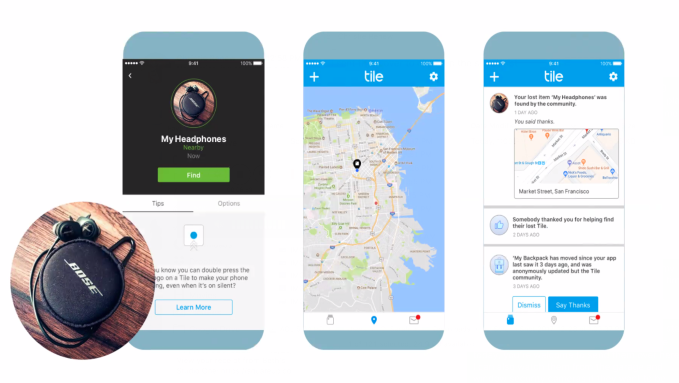 The addition of Bose comes alongside the announcement of several new partners that have confirmed plans to integrate Tile into their products. Other new additions include Samsonite, which will make luggage that doesn’t get lost; Propeller Health, which will add Tile’s technology to its connected inhalers for people with asthma and Chronic Obstructive Pulmonary Disease; Boosted, which will add Tile to its Boosted Boards; plus baby wearable maker Starling; and Herschel, which makes wallets, keychain holders and passport holders.

Tile is also adding a range of access points partnerships to expand its network, thanks to deals with Comcast, Ruckus Networks, and San Jose International Airport. The airport deal went live in November 2017 and Tile says it’s already seen a 20 percent increase in same-day found rates, bringing the rate to 95 percent.

“It’s exciting to see the Tile community grow exponentially, not only with more consumers but also with leading brands and even locations,” said Mike Farley, CEO and Co-Founder of Tile, in a statement. “Airports are just the beginning. We’re looking at all high-traffic areas where things that matter to us are commonly lost – hotels and malls, as well as homes and neighborhoods. With these key partnerships, we truly are blanketing the world with smart location.”

The new partnerships announced today will kick off in spring 2018, with Bose’s integrations and Samsonite’s global pilot.