After raising $28 million last November to add more firepower to its growth, Kano is unveiling the newest addition to its range of build-it-yourself gadgets that you use to learn to code: a camera.

London-based Kano is using this week’s CES in Las Vegas to show off a full prototype of the new Camera Kit — designed to work with Kano’s existing suite of gadgets, which include a computer kit, a motion sensor and the Pixel animated lightbox.

The camera is launching at an unspecified date later this year, so there’s no official price attached to it yet (although a Kickstarter page giving a sneak peek of it last year said it would cost $129.99). You can register your interest for ordering one here.

As with its previous hardware — which has been used by around 200,000 people globally, who have coded and posted to Kano’s community over more than 380,000 apps, artworks, songs and games that they’ve created using that hardware — the idea behind the Kano’s camera is two-fold.

First, the company aims to make tech and the use of it more accessible by demystifying how it works by giving people the components and instructions to assemble the camera themselves. Second, it then carries on the step-by-step nature by gradually introducing different functions and showing users how to use them to build software for their newly assembled hardware.

While the lightbox, for example, let you create light-based artwork and games, the camera gives users the ability to “code” it to make different photo filters, GIFs, and to modify the settings for how the image is captured in the first place.

Adding a camera into the mix is an important step for Kano.

With the rise of smartphones and mobile phones in general — and their move into becoming a near-ubiquitous computing and communications device for younger people — the camera has become one of the most significant and used features of these devices. These days, having a device for capturing and manipulating images would feel like something important is missing, not just for users but for Kano itself as part of its mission. 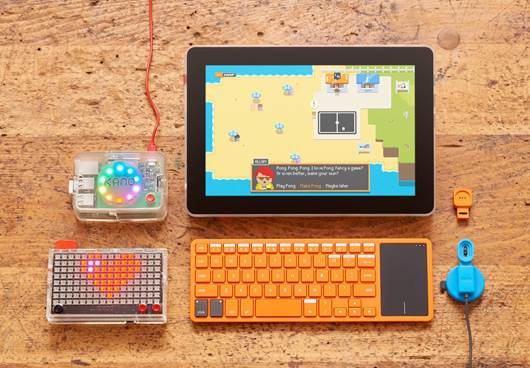 “What we are doing here has not really been attempted for several decades,” CEO and co-founder Alex Klein told me last year. “We are building a computing company end to end.”

What this also means is that having one as part of the Kano suite gives the whole platform a new profile with a new group of users. There will always be those who are happy tinkering with any gadget and learning how it works, but potentially, those who may be less interested in building games, might be more interested in figuring out how a digital camera works and customising it.

“Our goal is to open up technology, so that anyone can understand and shape it,” said Klein in a statement today. “We are thrilled to bring simple, playful, creative computing to CES for the first time.”

Part of that mission has been also to use different channels to appeal to a wider audience. That’s included revealing new devices and uses in YouTube videos, and sneak-peaks on crowdfunding platforms like Kickstarter. The page where Kano had first unveiled the camera among other new gadgets last year has already picked up more than $643,000 in backing.