Alexa continues to make its way to the TV — going beyond attached players like Amazon’s Fire TV and Fire TV Stick or the Fire TV Edition televisions. At CES, a number of TV manufacturers announced their plans to integrate Amazon’s voice-controlled smart assistant into their own sets, either for the first time or as an expansion on earlier efforts, including Hisense, Sony and LG.

Ahead of CES, Hisense announced Alexa would come to select models of its 2018 4K Smart TVs for the first time, including the 100″ 4K Ultra HD Smart Laser TV.

With Alexa built-in, the smart TVs let you do things like launch apps, play music through services like iHeartRadio and Pandora, control the smart home, get movie recommendations, order from Amazon.com or take advantage of Alexa’s third-party apps, called skills, using your voice, and more. The Hisense TVs also will let you use Alexa to control their hardware — like changing the volume or switching inputs.

LG, meanwhile, had previously announced select 2018 TVs would include a built-in Google Assistant to accept voice commands from the remote. These sets let you search info from the electronic program guide — meaning you could command it to turn the TV off when a show ends or search for a movie soundtrack, for example. The TVs also work with Google Home smart speakers.

This week, LG showed off its new Google Assistant-controlled TVs, but noted that the TVs will work with Alexa, as well, via an LG skill and a device like the Echo smart speaker.

Sony is doing something similar, as well. Sony previously offered some 2016 and 2017 Android TVs with support for Alexa, and is now expanding that support to its new 2018 TVs as well. 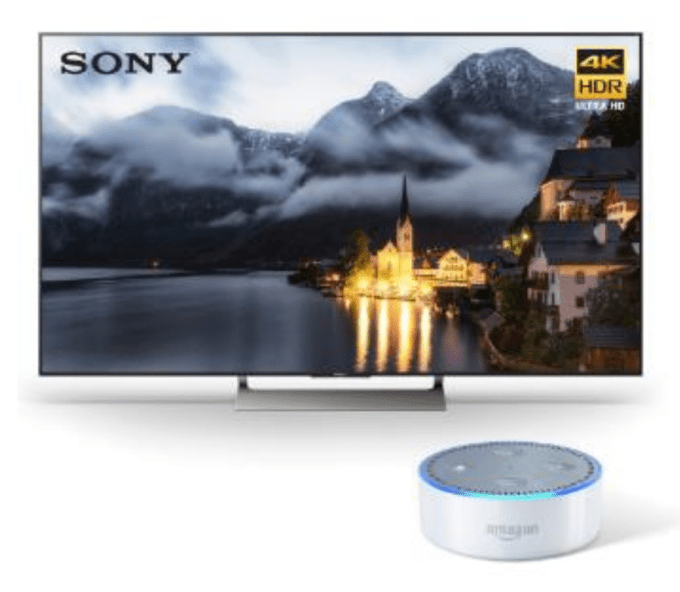 Like LG, the Sony TVs themselves come with Google Assistant built-in, but they work with other smart speakers, like Sony’s own LF-S50G, in addition to Google Home and Amazon Echo line.

It’s interesting to see these TV makers taking a hybrid approach to how their sets will work with smart speakers and voice technology. While Amazon uses Alexa in its own media players, these companies are instead taking advantage of Google Assistant — which is arguably better at search — then, adding Alexa support as a third-party integration of sorts.

While these TV makers are making CES 2018 announcements, Alexa works with other partners in the TV industry, often by the way of add-on skills. In addition to Sony, for example, BenQ and Logitech also have Alexa skills.