Twitter will now display messages to inform users if blocked tweets were withheld to comply with local laws or court orders, which it calls Country Withheld Content (CWC). The public already has information about CWC through notices sent directly to affected accounts, Lumen, a database of legal requests for the removal of online content, and Twitter’s own biannual transparency reports. The new interstitials, however, will give Twitter users information as soon as they try to access blocked tweets or accounts.

Similiar messages will also be shown on accounts that have been blocked in their entirety. All interstitials will link to information about Twitter’s policies. 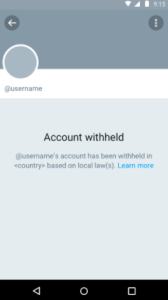 In an announcement, Twitter global legal policy director Jeremy Kessel said “The more that we can share about our actions, the better the public can understand the various challenges, legal or otherwise, that we face and how we handle them. We are pleased to be able to share this step, but there is more to be done.”

In its latest transparency report, Twitter says that between January and June 2017, it received about the same number of removal requests, including court orders and requests from government agencies or police, as it did in the previous reporting period. The requests referred to about 14,120 accounts. Of those, 9,337 had no action taken against them by Twitter, while 1,760 had some content withheld and 3,023 had content removed for violating Twitter’s terms of service.

Though Twitter received requests from 46 countries, the vast majority, or about 90%, originated from France, Germany, Russia and Turkey. Turkey alone accounted for more than 45% of overall worldwide removal requests. Twitter says it received eight legal requests to remove content from the verified accounts of journalists or media outlets, but did not take action. In several cases, Twitter filed legal objections to court orders involving Turkish news media, though none of its objections succeeded.

Twitter began publishing its transparency report in 2012, but the company has recently come under more scrutiny over how it handles controversial content, due largely to outcry over white supremacist accounts and several tweets from President Donald Trump’s personal account, which critics believe violate Twitter’s terms by inciting violence and spreading hate speech. In response, Twitter has provided more details into how it decides to take action against accounts or tweets.