When Microsoft announced the Windows 10 Fall Creators update, one of the most interesting features the company demoed was Timeline, which lets you find and resume your recent activities as you move between PCs and iOS and Android phones. It’s basically a global task view, backed by Microsoft’s cloud services. Like some other features, Timeline wasn’t quite ready in time for the Fall Creators update, though, so it’s only today that Timeline is making its debut in the latest Windows 10 Insider preview build (and only for those users who are in the more experimental Fast ring, as well as those who opted in to the Skip Ahead builds). 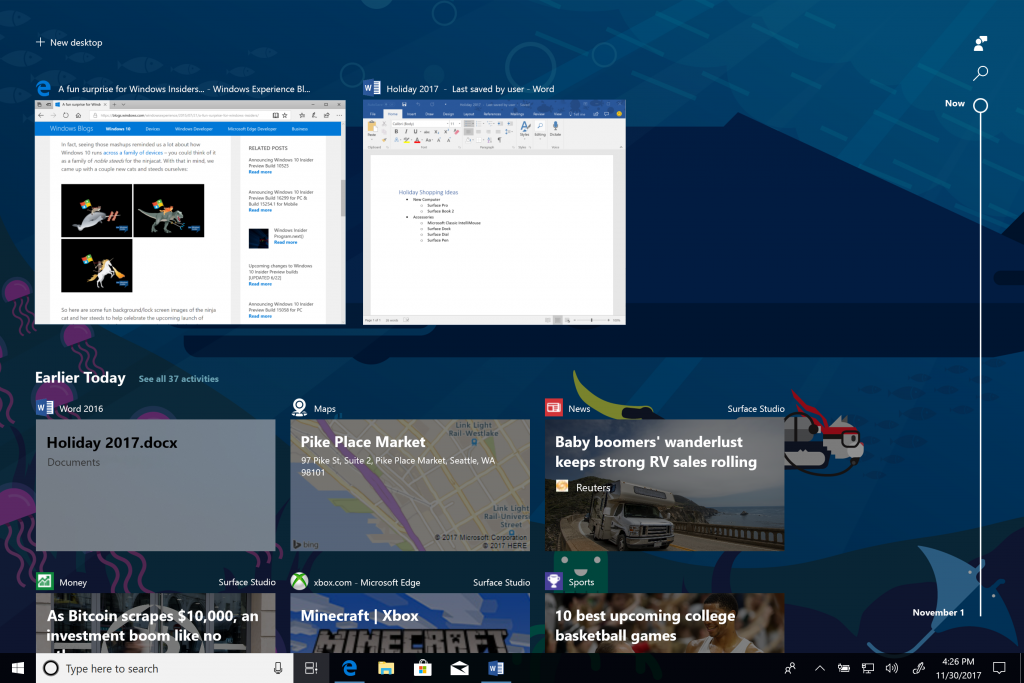 The basic idea here is provide you with an easy to use overview of all your recent activities, be that a document you were working on in Word or a website you were looking at in Edge (maybe even on an Android phone), and then let you pick up when you get back to your laptop or your desktop in the office. Timeline will highlight those documents that you’ll likely want to work on, but it also will present you with a full list of your recent activities, organized by hour. Cortana, too, can remind you of activities that it thinks you’ll likely want to resume as you switch between devices.

If you’ve already installed the latest update, the new Timeline view will live behind the new Task View icon in the task bar, or you can reach it by pressing the Windows key plus tab.

It’s worth noting that app developers do have to explicitly support this feature in their apps. Right now, this means only browsing in Microsoft Edge and documents from Microsoft Office, as well as activities in Windows 10 apps like Maps, News, Money, Sports and Weather, are supported.

Besides numerous updates to the Edge browser, another new feature that actually looks quite useful is Sets (which the company first announced last month, though only a subset of Insider users will get this with this release). The idea here, Microsoft says, is to let you group documents, other files and applications that belong to a given task and make those available to you with a single click.

Maybe a better way to think of this is as universal tabs that allow you to group applications like Word, OneNote and your browser into a single window that allows you to switch between activities just like you would between browser tabs.

As usual, you can find a full list of all the changes in this release (and there are a lot of them) here.