Facebook wants to make sure you know about and control the photos of you people upload, even if they don’t tag you. So today, Facebook launched a new facial recognition feature called Photo Review that will alert you when your face shows up in newly posted photos so you can tag yourself, leave it be, ask the uploader to take the photo down, or report it to Facebook.

The feature should give people confidence that there aren’t pics of them floating around Facebook that they could see but just don’t know about. It could also help thwart impersonation. But Facebook tells me it has no plans to use facial recognition to enhance ad targeting or content relevancy sorting, like showing you more News Feed posts from friends who post untagged photos of you or ads related to locations where you appear in untagged photos.

If you’re in someone’s profile photo which is always public, you’ll always be notified. For other photos, you’ll only get notified if you’re in the audience for that photo so as to protect the uploader’s privacy and not alert you about photos you’re not allowed to see. A Photo Review section of the profile will keep track of all your untagged but recognized photos. 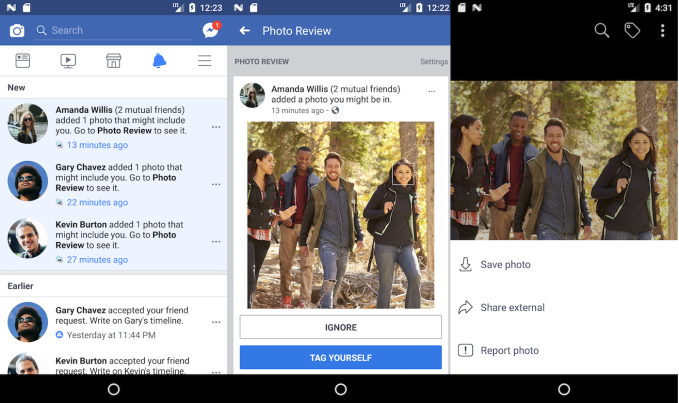 Facebook is also adding a new overarching photo and video facial recognition opt out privacy setting that will delete its face template of you and deactivate the new Photo Review feature as well as the old Tag Suggestions that used facial recognition to speed up tagging when friends posted a photo of you. These will all roll out everywhere over the next few weeks except in Europe and Canada where privacy laws prohibit Facebook’s facial recognition tech.

Facebook is also using the feature to assist the vision impaired. Now Facebook’s machine vision-powered feature that describes what’s in a photo will also read aloud the names of untagged friends.

While Tag Suggestions might be seen as weakening privacy, Photo Review could be perceived as enhancing it and might get a pass from regulators. Whether it’s an unauthorizied photo of you that you want taken off Facebook, an embarrassing pic you don’t want tagged but want to monitor comments on, or someone trying to pretend to be you, Photo Review gives people more visibility into how their likeness is used.