Coinbase is investigating whether its employees took advantage of inside knowledge to profit on the launch of bitcoin cash (BCH) when it was added to the popular crypto exchange.

The company, which recently raised $100 million at a valuation of $1.6 billion, finally added support for BCH — a fork of bitcoin — on Tuesday after much demand from users. But, in true Coinbase fashion, the launch was mired with service outages as the price of the new addition fluctuated wildly.

The price of BCH hit a high of $8,500 on Coinbase and its GDAX service for professional investors, which was almost three times higher than the $3,500 price on all other exchanges. That led to calls of insider trading from Coinbase staff who, in theory, could have profited by buying BCH on other exchanges in the knowledge that it was about to be added to Coinbase, a move that would (and did) trigger increased trading volume and a higher price as the exchange’s 10 million-plus users got a piece of the action. 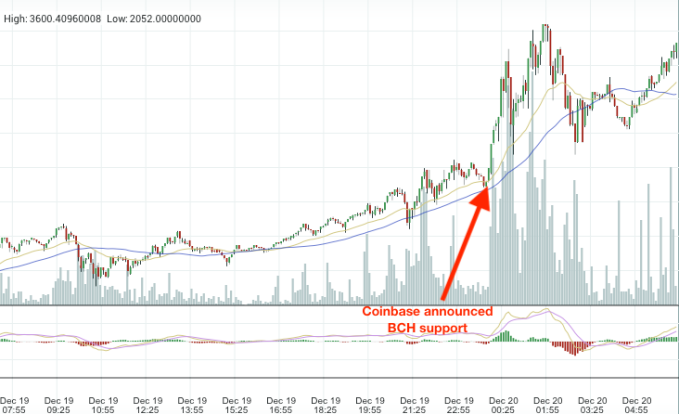 Now Coinbase CEO Brian Armstrong has confirmed that the company is investigating the events around the price spike.

“Given the price increase in the hours leading up the announcement, we will be conducting an investigation into this matter. If we find evidence of any employee or contractor violating our policies — directly or indirectly — I will not hesitate to terminate the employee immediately and take appropriate legal action,” he wrote on Medium.

Armstrong said that Coinbase staff, friends and family have been forbidden from trading BCH for the past month while it formulated plans to list the coin on its exchange. That, he said, is line with policy over ‘inside info,’ including when Coinbase added support for Ether last year and Litecoin this year.

“We’ve had a trading policy in place for some time at Coinbase. The policy prohibits employees and contractors from trading on “material non-public information”, such as when a new asset will be added to our platform. In addition to trading restrictions, it prohibits communication of material non-public information outside the company. This includes to friends and family,” Armstrong explained.

It’s a messy end to what should have been an important moment for Coinbase, which this month hit the top spot in the U.S. App Store thanks to a bitcoin frenzy that has seen the cryptocurrency hit record highs of close to $20,000 in recent weeks. Instead, the BCH has launched has ended in frustration for users who were either unable to get their hands on the coin, or were forced to pay way over the odds for it.

Disclosure: Both authors own a small amount of cryptocurrency. Enough to gain an understanding, not enough to change a life.