Adobe announced a record quarter yesterday with $2.01 billion in revenue for Q42017. That represents a healthy 25 percent year over year increase for the company, but about half of that continues to come from Creative Cloud.

Experience Cloud, which includes Adobe Marketing Cloud, Adobe Analytics Cloud and Adobe Advertising Cloud in many ways represents promise for even greater revenue in the future.

Creative Cloud, which includes popular tools like PhotoShop and InDesign, took in $1.16 billion for the quarter as it continues to be the chief revenue cash cow for the company. That’s not to say the other parts of the company did poorly, but it has to be troubling to Adobe that Creative Cloud represents so much of its revenue with so many enterprise products in other categories.

Last quarter CEO Shantanu Narayen was not happy with the Experience Cloud’s overall performance. Narayan actually called it out in the Q3 Earnings Call saying, “Despite this success with global enterprise customers, we were disappointed with our Experience Cloud bookings in Q3 but remain confident in our ability to execute against this large opportunity,” he said.

He’s right. In many ways, the Experience Cloud set of products represents a much bigger potential opportunity than even Creative Cloud, as it is aimed at a much more lucrative enterprise market. While the Experience Cloud generated record revenue of its own in Q4 with $535 million reported, an 18 percent year over year increase, you can’t help but notice that it represents about half the amount of quarterly revenue the Creative Cloud division brought in.

While Narayan has to be happy to see the growth after calling the division out last quarter, he has to know that there is still a substantial untapped opportunity in Experience Cloud that could be much larger than half a billion dollars.

Adobe is the 11th biggest software company in the world, according to the list compiled by PWC. Yet it has the potential to be so much bigger if Experience Cloud could begin generating a similar amount of revenue that the company garners from the Creative Cloud.

In spite of the record quarter, the stock price was down 60 cents this morning as of this writing. 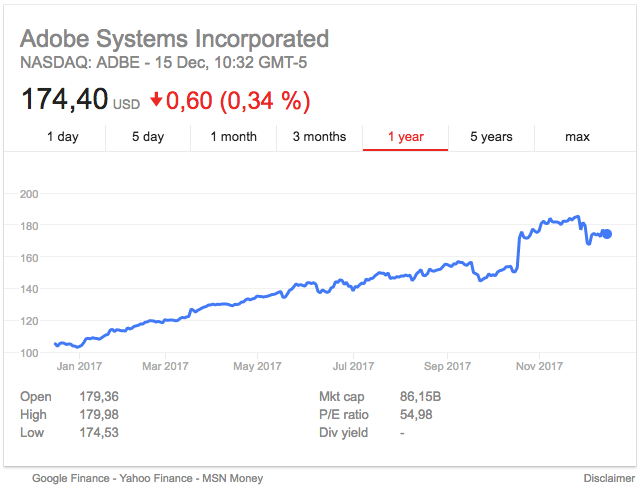