There are few metrics in the world that offer as much insight into our society as Google’s annual “Year in Search.” More than any of the other year-end download and streaming roundups, Google’s offers a clear snapshot of the things that captured our imaginations and baffled us during what felt like a particularly turbulent year.

Here in the U.S., the top overall searches cover a pretty wide range of the human experience, running the gamut from natural phenomenon, to sports, to human tragedy, to the sexual misconduct allegations that have been echoing across a wide range of industries in recent months.

Hurricanes Irma and Harvey took the first and eighth spots in the Top 10, and August’s much-hyped solar eclipse came in at No. 7. The October shooting in Las Vegas that ended in 59 deaths was the No. 5 search. Musician Tom Petty was both the top search in celebrity deaths and No. 3 overall, while former Patriots tight end Aaron Hernandez, who took his own life in a prison cell in April, was No. 9.

The Super Bowl and the Mayweather/McGregor fight landed at four and five, respectively, and the fidget spinners that briefly caught our short attention spans this year hit No. 10. Former NBC anchor Matt Lauer hit No. 2 overall and was the top person search in general. A number of other subjects of sexual misconduct allegations also made the Top 10 people list, including Harvey Weinstein, Kevin Spacey and Bill O’Reilly.

Apple had the strongest showing in Consumer Tech, with the iPhone 8, iPhone X, iPhone 8 Plus and Apple Watch 3 scoring spots one, two, six and nine. Nintendo and Samsung also had strong showings with the Nintendo Switch, Samsung Galaxy S8, Super NES Classic and Samsung Galaxy Note 8 making the Top 10 in that category.

People were also looking for ways to make their own eclipse glasses, fidget spinners and slime. More people wanted to know what DACA (Deferred Action for Childhood Arrivals) was than anything else. Bitcoin also had a strong showing at No. 2. 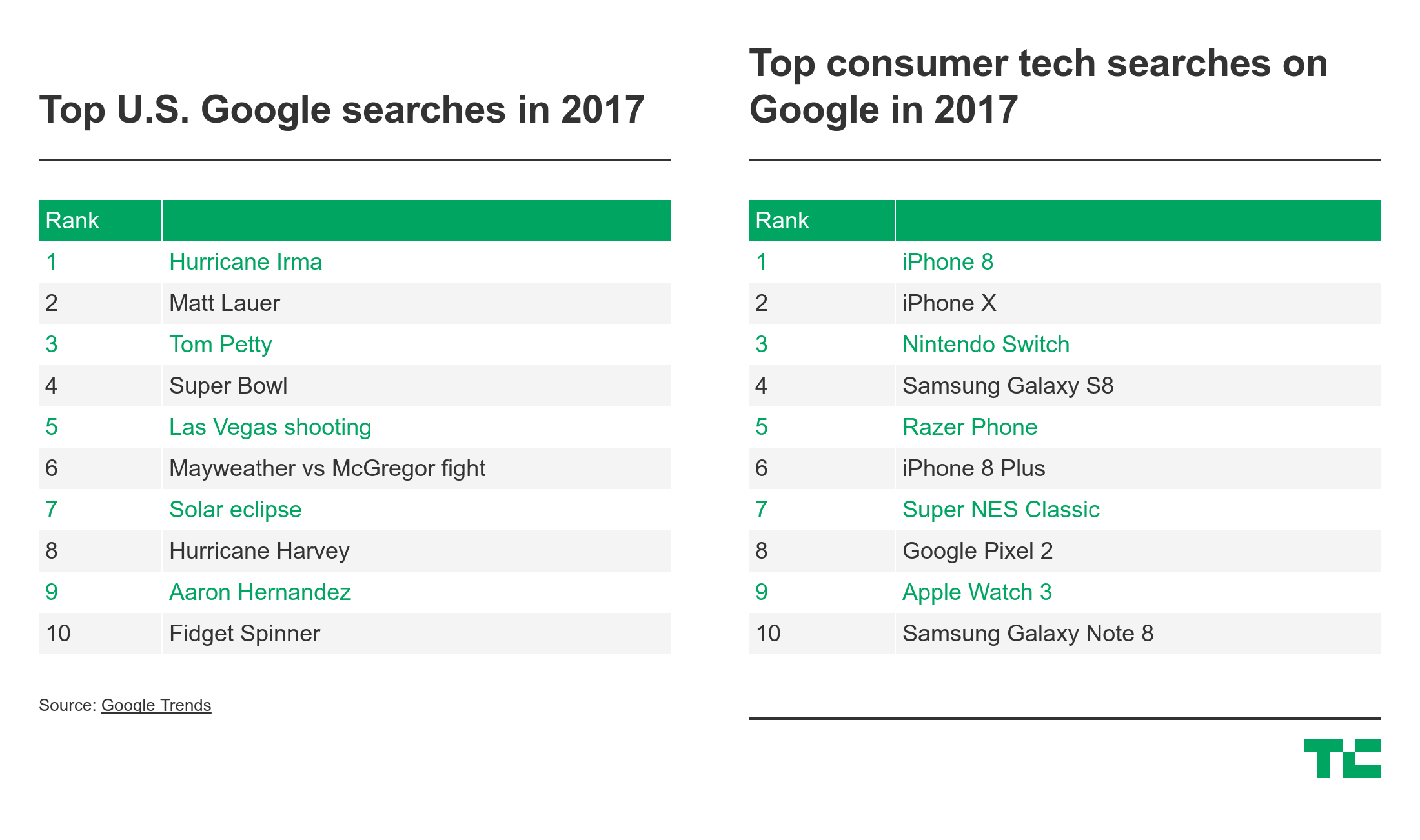