The comparison seems particularly apt, since Last Jedi occupies a similar spot in the new Star Wars trilogy. It doesn’t openly ape the story of Empire the way The Force Awakens gleefully copied the original, but there are some pretty obvious parallels: Episodes V and VIII both open with a spectacular attack on a rebel base, then jump back-and-forth between multiple threads, one where our heroes flee from the Empire (or the First Order), another where a talented young Jedi seeks guidance from a reluctant teacher.

Like Empire, The Last Jedi uses this plot structure to explore its predecessor’s ideas and characters in greater depth. For one thing, there’s good news for Oscar Isaac fans, as his character Poe Dameron gets much more to do. We also see more of the conflict within both Rey (Daisy Ridley) and Kylo Ren (Adam Driver), and more of the bond between them.

Even more gratifying is the time spent with the remaining stars from the original trilogy. Of course, there’s an element of melancholy in seeing Carrie Fisher’s final performance as Leia Organa, and in knowing that if she’d lived, she would have had a larger role in Episode IX. But she gets some big moments here, both to kick ass and show quiet emotion. (The film is dedicated to her.) Similarly, Mark Hamill seems to relish the opportunity to portray the disappointment and regret felt by an older Luke Skywalker, while giving us hints of the brash, impatient hero still inside. 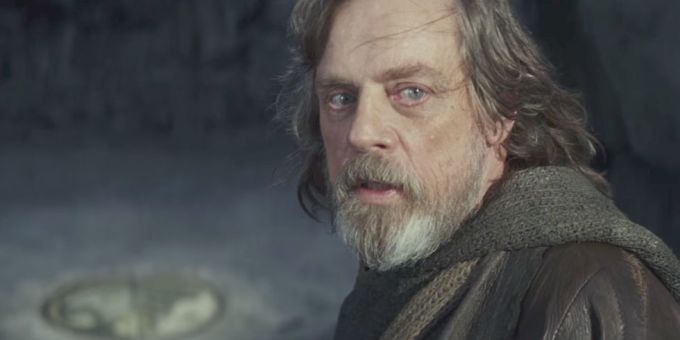 If some of this sounds pretty heavy, it certainly can be. Where The Force Awakens usually moved too quickly to deal with the bleakness of its core conceit (which saw the Rebellion undermined, then nearly wiped out, and its heroes scattered), The Last Jedi actually embraces a sense of futility and defeat. The movie’s final act mixes hope and despair nearly perfectly — I don’t want to admit that this is the first Star Wars movie to make me cry, but here we are.

Let’s not overstate this: We’re not talking about a Lars Von Trier movie. But the script directly addresses the fact that Return of the Jedi‘s triumphant finale has been reduced to a temporary victory in an ongoing struggle between light and dark. It suggests that the repressive forces of Empire are never fully defeated, but must be beaten back again and again — and if that idea seems particularly applicable right now, well, hmm.

At the same time, writer-director Rian Johnson clearly worked hard to make sure The Last Jedi didn’t feel terribly dark. Some of his tactics are less effective than others — a detour to a casino planet is fun, but it goes on for too long, making me impatient for a return to the good stuff, namely the drama unfolding between Luke and Rey.

But on the whole, Johnson has crafted what might be the smartest and funniest Star Wars script yet. Think of that moment at the beginning of The Force Awakens where Kylo Ren looms menacingly over Poe Dameron, only to have Poe ask, “So, who talks first?” The Last Jedi is like an entire movie made up of those moments, where there’s plenty of seriousness and drama, but it’s frequently undercut by jokes and sight gags.

Johnson also applies his awareness of audience expectations to the plot itself, delivering a few revelations that were genuinely surprising. At least one of those moments was less dramatically satisfying and more of a deliberate anticlimax — but in a way, I appreciated that, too.

After all that praise, I should maybe acknowledge that I’m not, shall we say, the biggest Star Wars fan. I like it fine, but I’m a Star Trek guy at heart, and there are probably millions of people in the world who are more enthusiastic about this franchise than I am. Luckily, my colleague (and serious lover of Star Wars) Greg Kumparak also made it to a screening yesterday, and he shared my enthusiasm: “Fuck yeah I am so excited Rian Johnson is getting his own trilogy. More of this, please.”

About that new trilogy: While it’s nice to see Star Wars acknowledging the cyclical nature of its story, there’s a thin line between cyclical and repetitive. Johnson managed bring a fresh approach to a traditional Star Wars story, but I felt some strain — there are only so many times I need to see a young Jedi telling a tormented Sith Lord that they still have good inside them, you know? Hopefully, Johnson’s next Star Wars movies will explore other corners of the galaxy, with new types of stories.

Also, you may noticed have that I’ve made it hundreds of words into this review without weighing in on perhaps the most pressing issue in Star Wars fandom: What about the porgs? I’ll let Greg take this one, too:

To put everyone’s fears to rest: Porgs are totally fine. They are not the next coming of Jar Jar. Yeah, yeah, they’re largely there to be cute and print money in the form of stuffed animal sales, but they earn every bit of screentime they get.

Greg’s right. The porgs are good.