Apple has quietly allowed developers to make their apps available for pre-order.

It’s a basic feature — as Android fanatics will point out — but nevertheless one that has been missing from the App Store.

Upcoming apps will now be allowed to list in the App Store as far out as 90 days ahead of their launch and as close as two days before. This applies to new apps not updates to existing ones.

Once the app is released, it will be automatically downloaded to a user’s device if they hit the pre-order button. In cases where there’s a price for the app, as is common with games, the customer will only be charged once the app is ready for download. Users are free to cancel their pre-orders before the launch date arrives.

Most interest is likely to be driven by direct-to-user marketing from companies — Apple is giving developers special branding to help on that front — but apps can also be found under the new “Pre-Orders” section within the Games tab of the App Store. That’s available in the U.S. but it doesn’t appear to have come to the App Store in UK and other global markets just yet. 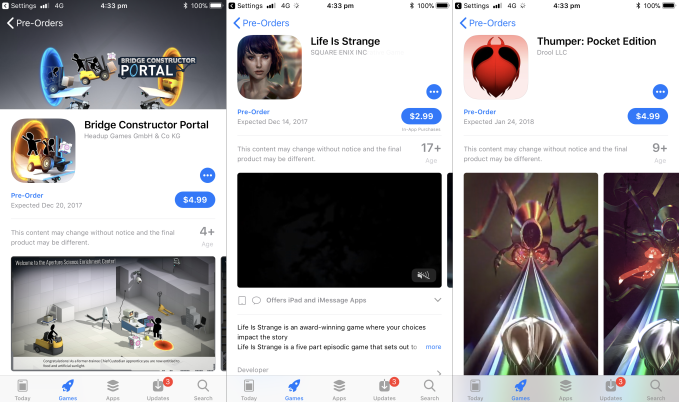 The change comes more than a year after Apple allowed users to register to be notified when a new app is available in the App Store — Super Mario Run was the first real usage of that.

Handling the download automatically makes a lot more sense, particular given the deluge of notifications that users get these days, plus it truly opens the door for businesses to market their upcoming apps and services ahead of time.