European VC firm Index Capital is just over two decades old and has 200+ companies in its investment portfolio at this point — but it’s still got work to do on the gender balance front.

“It should be half,” agreed general partner Jan Hammer, discussing the company’s gender balance here at TechCrunch Disrupt Berlin.

“I think we need to revise our website,” responded Hammer initially, noting that Index in fact has five women working as investment professionals — two as principles — though its nine partners are all men.

But he added: “Arguably it could be improved.”

“For every position and for every hiring decision we have to have equality of gender. And secondly for every finalist interview we have to have at least one of each gender,” he said, noting the policy has been put in place “in the last couple of years”.

“Obviously it’s a topic that applies to far broader than just the venture industry. It’s the financial industry at large. But also our portfolio companies.”

“If you look at associate principles, we’re pretty much there,” added Index’s Martin Mignot, who was also on the panel. “You have to understand that it takes six, seven, eight years to go from associate to partner — so it just takes time for that to trickle down.” 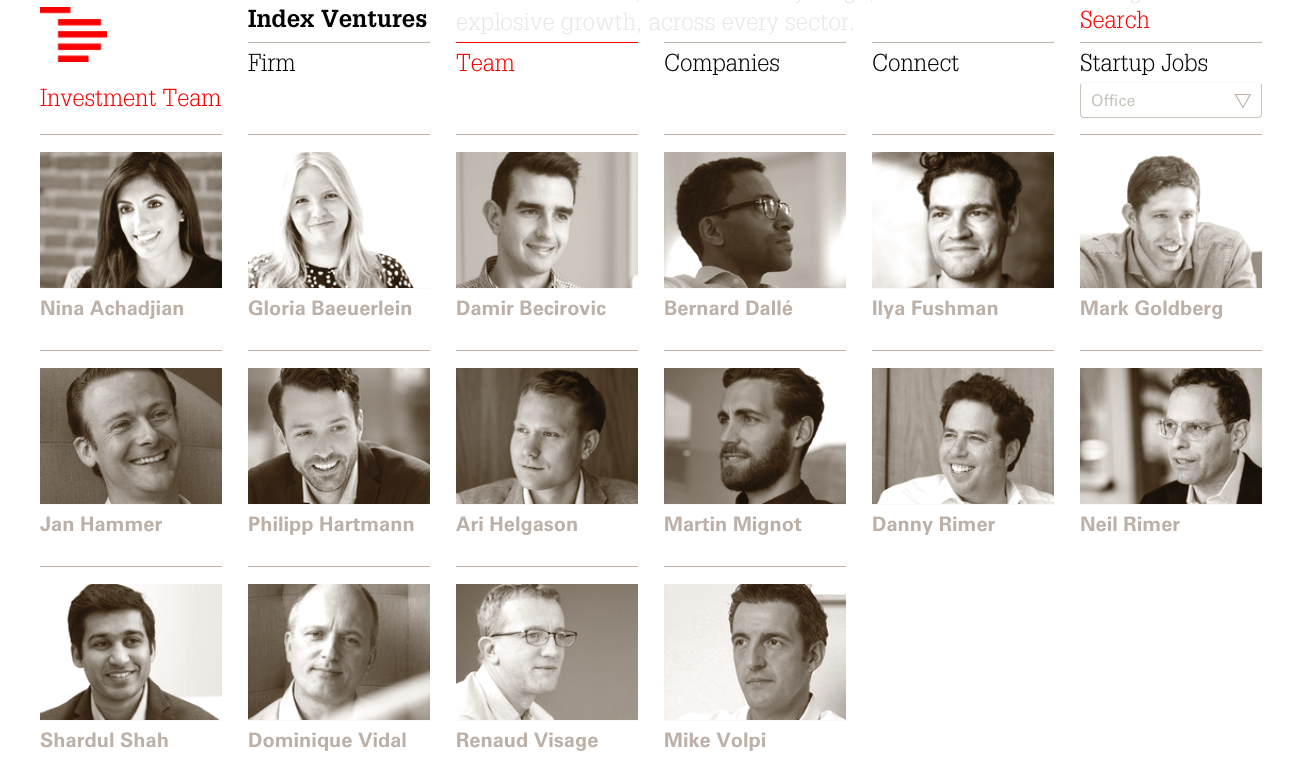 They were also asked about the issue of sexual harassment which has blown up publicly at multiple companies in the tech space this year, including some investment firms. Index itself has never had to face any enforcement situations relating to sexual harassment, they said.

“The one difference between Index and maybe some other partnerships is that we work as a team and no portfolio company is ever sort of stranded with just one point of contact,” said Hammer discussing the harassment issue. “We operate with a system of a shadow partner on every deal. So you always have two partners.”

During the session they also discussed differences between the investment ecosystem in Europe vs the US, and touched on some areas of investment focus — including fintech, where Hammer noted that some functions that have historically been beyond the reach of startups “because of capital intensity” are now coming into range.

“One stat to quote: The number 50 bank ranked by market cap in the world has a $38BN value. Which sort of shows how far the ceiling is,” he said on that, adding: “The sky’s the limit… There’s everything to play for.”

On technologies that Index views as ‘underhyped’, Mignot noted that the firm has been doing more in the health tech space — flagging its investment in Swedish telemedicine app startup KRY, for example.

“It feels like the very early days of fintech,” he said. “Maybe where you’re still trying to find your way around a very complex regulatory environment — but things are slowly opening up, and government are maybe now becoming more favorable, creating some sandbox environments where startups can start to test and iterate.

“And it feels like that’s one that’s going to open massively in the next few years.”