The last time Mario had a breakfast cereal, he had to split the billing with Link. I bet that’s what it felt like being in the Beatles at the end. Flying high from a recent string of high profile titles — including Mario Run and Odyssey — the cartoon plumber is finally getting a cereal box to call his own, joining the elite ranks of Steve Urkel and Gizmo from Gremlins.

The Kellogg’s-made foodstuff looks to have a very Lucky Charms-esque vibr, with a mix of power-up marshmallows and cereal stars, flavored with something called a “blast of mixed berry.” All standard sugary breakfast cereal stuff, of course, but there’s a 2017 twist here, in the form of a box that doubles as an Amiibo accessory.

It’s basically on-box cheat code that unlocks gold coins and hearts in Mario’s new Nintendo Switch title. And from the looks of it, if you eat enough of the limited edition cereal, you’ll also unlock a trip to the dentist.

The cereal is set to hit store shelves in the U.S. “as early as” December 11. Meantime, let’s take a moment to appreciate how far video game-based artwork has come in the last 30 years. 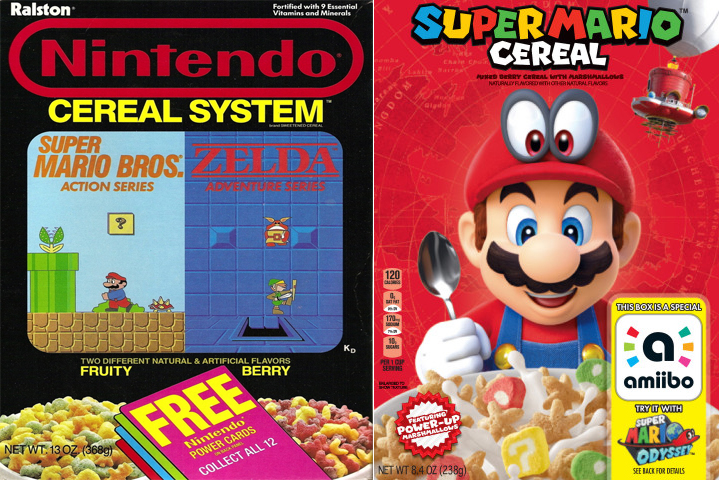