Amazon Fire TV owners will now be able to control more video apps using Alexa and their voice, the company announced today. This feature lets you ask Alexa to “watch,” “play,” “pause,” “rewind,” “fast forward,” and more. It can also take you to an individual show, network, or specific genre of programming.

Before, Alexa could control Amazon’s own video content in this fashion. But now the same voice commands work with third-party apps like Hulu, NBC, Bravo, and others that quietly launched voice support last week, including Showtime, Sony PlayStation Vue, and CBS All Access.

Amazon had originally teased the expanded in-app video skills when it launched the new Fire TV with 4K Ultra HD in September, saying that Alexa would be able to pull up results from select video apps, like Netflix, Hulu, Showtime, Amazon Video and others. 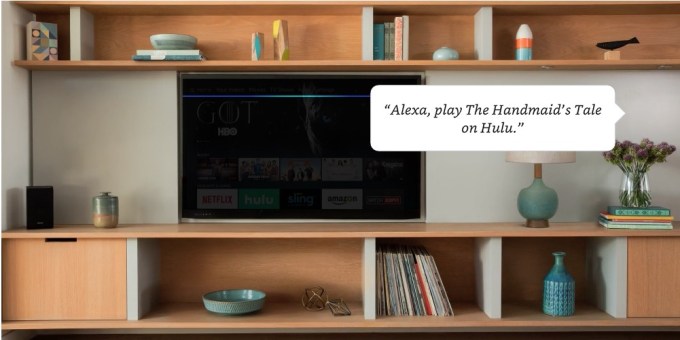 To use the feature, you can say something like “Alexa, watch The Handmaid’s Tale”, “Alexa, play The Good Place” or “Alexa, show me comedies on Showtime,” for example.

With the Alexa voice remote, users can navigate through content with commands like “play,” “next episode,” “last episode,” “start over,” “play from the beginning,” and more, or even change the channel using their voice (if supported).

Additionally, Echo owners can pair their Fire TV with their smart speaker to allow Alexa to control the video apps without the need for the voice remote.

The company has been working to make Alexa-powered apps more accessible to video providers for many months now. In June, Amazon announced a tool for developers of cable TV apps, streaming services, and other content providers that would let them add voice control to their apps.

Amazon says this set of partners is the first to debut the functionality, but others are expected to launch their own updated apps in the coming weeks and months.