By putting best friends first and dividing them from professional publishers, Snapchat hopes to conquer Instagram and revive its own growth with a big redesign that begins rolling out Friday. And it looks great. Snapchat is finally personalizing, highlighting the most relevant content so it’s easier to consume.

“We are separating the social from the media, and taking an important step forward towards strengthening our relationships with our friends and our relationships with the media,” Snapchat CEO Evan Spiegel wrote in an Axios op-ed this morning. Rather than sorting content by how popular it is with everyone else like Facebook or by reverse chronological order like Snapchat used to, Snap will mold itself to what each person watches most, like Netflix.

Even if Snapchat struggles to add more users amidst Facebook’s competition, its new algorithms could get loyalists spending even more time and seeing more ads in the app. A small percentage of users worldwide on iOS and Android will start getting the new Snapchat on Friday, earlier than expected, and it should be rolled out to everyone within a few weeks.

So what exactly is the redesign? It puts all messages and Stories from friends to the left of the camera, sorted by who you talk to and view most. It revives auto-advance, so you can watch everyone’s Stories in a row, but with best friends, not people who post the most first. And it puts to the right of the camera all premium publishers, pro social media stars you follow and aggregated stories from search and Snap Map in the Discover section, curated by humans and sorted by your past viewing behavior.

Snapchat will still show ads between Stories and Discover content like always. But because all the best content is shown in a row instead of being sorted chronologically or more uniformly for everyone, people will become less accustomed to skipping content, including its ads. That could be a boon for Snapchat, which fell $30 million short of revenue expectations last quarter, sinking its share price. Snap is down 2 percent today, potentially because the redesign mostly shuffles existing content rather than adding big new things, but Facebook is down 3.75 percent, perhaps because Snap is correcting some of its core flaws here and adopting Facebook’s algorithmic approach.

In reality, Snapchat needed this redesign a year ago when Facebook began its attack of the clones. But better late than never, and Snap’s willingness to flip-flop on so many of its design and strategy choices is the courageous move it needed.

How the new Snapchat works

Simple: The camera and profile 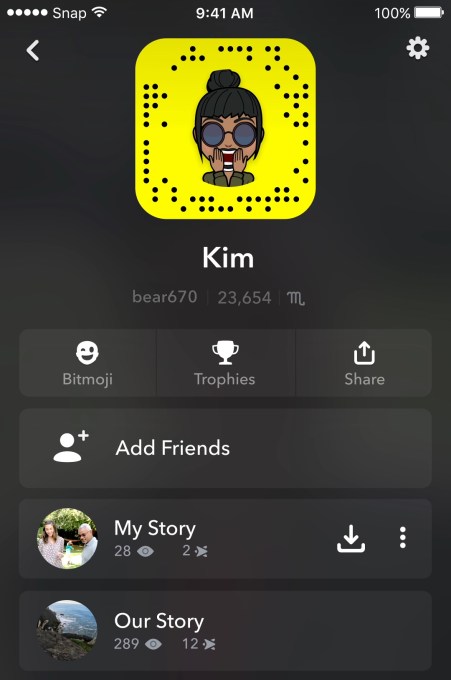 Snapchat still opens to the camera, but now that screen has an icon to open every screen in the app, so it’s more obvious how to navigate. Instead of burying Snap Map behind an awkward and unfamiliar pinch gesture, it opens alongside the Search bar. The profile will now be where you manage and check viewership of what you’ve posted to Stories, public Our Stories and custom group Stories. This is the UI simplification Snapchat needed to appeal to less savvy adults without classmates to teach them how to use the app.

Snap is mixing Stories and private messages in a single Friends tab. First you’ll see new Snaps and text chats at the top, then Stories from your closest friends you watch and chat with the most, followed by the Stories from the rest of your acquaintances.

Every group chat now gets its own Group Story all members can add to. Gone are social media influencers. Now if you follow someone but they don’t follow you back they’ll appear in Discover, whereas if they do follow you back, they’ll be on the Friends page. Influencers will also get to choose if they want to share to just their friends or their followers too. The split should take pressure off your friends to perform like they’re stars, encouraging people to post more raw and esoteric content instead of a perfectly polished presence.

Back in April, we wrote that Snap was shooting itself in the foot by not algorithmically putting your best friends’ Stories first like Instagram does, rather than highlighting the most recently posted Stories, which emphasized oversharers you might not care about. Now it’s making that change. Importantly, Snapchat is bringing back Stories auto-advance, but with a twist. Snap used to automatically play the next Story in your list after your last, but Snap moved to a more cumbersome Story playlist in late 2016 where you had to manually pick what you wanted to watch. That and Instagram Stories are believed to have sapped view counts, leading many to think Snapchat had lost its mojo.

Now, when you finish watching one Story, Snap will show a brief interstitial screen with the name and a preview of the next friend’s Story. That way you can swipe down to exit out before you watch it (which friends can see in their analytics), or swipe over to skip to the next preview. This combined with the sorting makes it much easier to lean back and watch a ton of friends’ Snaps. It’s the most potent part of the whole redesign, and could seduce users who were losing their best friends’ Stories amongst the noise.

Publishers and creators: The new Discover 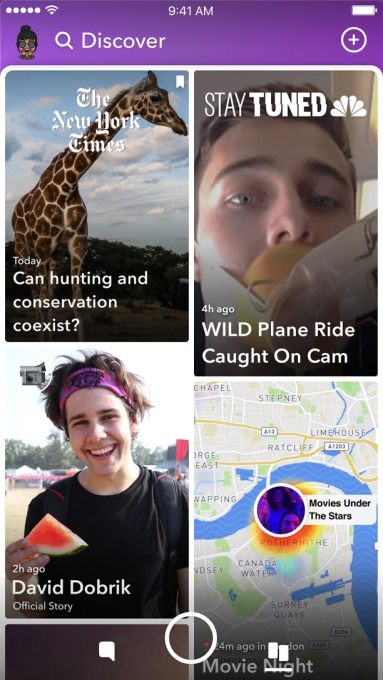 Snapchat now lumps all professional creators, whether they’re big news outlets or social media stars or video Show makers, into one Discover tab to the right of the camera. There also are aggregated Stories from hotspots on the Snap Map, Our Stories about events or holidays and topic-based aggregations from Snapchat Search. They’re all shown as big preview tiles, with Discover publishers and creators you actively subscribe to at the top. Everything else is sorted by what Snapchat thinks you want to see based on what you’ve watched in the past.

You’ll actually be able to influence the algorithm with what’s almost a reversal of Facebook’s “Like.” You can still tap and hold on Discover content to subscribe to the author, but you’ll also get the option to “see less” of this stuff. That way you can train the algorithm what to hide in the future.

Snapchat’s human editorial and moderation team will look at every piece of content it shows in Discover to make sure it’s high-quality, brand-safe and not fake news. By limiting what’s eligible for Discover and putting everything else in Friends, Snapchat can actually tackle the task of reviewing all its publisher content — unlike Facebook, which is a Wild West of whatever’s most engaging. That incentivized the fake news problem we see across the web, and Spiegel thinks tighter curation can solve the problem.

For the first time, Snapchat will begin promoting social media stars to new audiences. If a creator has enough followers, and its content is approved by the human moderators, it can appear as a “Popular Story” to users who don’t already follow that creator.

Starting in 2018, Snapchat says it will give independent social media stars ways to monetize their content, presumably by giving them a share of ad revenue they drive. Assisted audience growth and monetization could finally give creators a reason to invest time into Snapchat because they actually get something back like from YouTube, but not Instagram.

You can watch Spiegel explain why Snap is splitting up friends and publishers in this video:

The ball is now in Instagram’s court. If it’s smart, it will figure out its own premium content strategy. Right now, its Explore tab includes personalized and popular imagery plus hits from influencers. Meanwhile, Facebook’s Watch Tab of original videos hasn’t made many waves. With all its connections and reach, Instagram could recruit publishers and clone Snapchat’s new Discover page like it did Stories.

Teen Snap addicts might complain that the redesign is confusing, jumbling all content from friends together. People always recoil to change. But it also makes Snapchat much simpler and more sensible for an adult audience, and lets you squeeze the most value out of the app even if you only open it a few times a day. At half its IPO pop price, Snapchat needs a savior, and may have found it in the algorithm.