Snap Inc’s stock tanked after missing revenue expectations by $30 million last quarter, so Snapchat is looking to win over businesses with immersive new ads formats. This week it introduced two new forms of ads: Promoted Stories which string together multiple Snaps into a longer-form slideshows openable from a tile on the Stories page that’s shown to everyone in a given country, and Augmented Reality Trial ads that let people play with an AR version of a product overlaid on the world around them.

Together, these new formats could make Snap’s ads less skippable and more memorable, coaxing money out of businesses hoping to make a mark on premier audience of US teens. Both Promoted Stories and AR Trial ads go a step beyond what Facebook can offer, but could soon be copied like the rest of Snapchat.

Snapchat’s ads were predominantly either single Snap ads inserted between Stories or Discover content that could easily be skipped with a single tap, or sponsored creative tools that let you try on goofy masks or project 3D mascots into the world but that didn’t offer much utility. This may have left advertisers skeptical about the lasting impact on buying behavior. “Our advertising partners have been asking for ways to tell deeper stories on mobile” Snap’s Director of Revenue Product Peter Sellis told TechCrunch in a statement. HBO is piloting the format with Promoted Stories about why you should stay in and watch Game Of Thrones on Black Friday, while in Europe clothing brand ASOS highlights “night-out worthy looks.”

Now advertisers can string together a series of three to ten photos and videos to create a Promoted Story that auto-advances or that users can tap through to follow a detailed narrative about a brand or see multiple angles of a product. They can look like a user Story or a mini magazine-esque Publish Story like what appears in Discover, and each Snap can be swiped up to open a website, app install, or article.

These Promoted Stories are labeled “ad”, get their own preview tile, and are purchased on a full-country one-day takeover basis with users having to actively tap to view. Advertisers get back a range of analytics from preview tile impression through to conversions. Snap says it can reach 88 million people in the US with Promoted Stories, surpassing the 74 million Instagram Stories users, and approaching half as many as Facebook’s 190 million mobile audience members. For the coveted youths age 13 to 24, Snap reaches 47 million people — supposedly 9 million more than Facebook and 15 million more than Instagram’s feed.

To avoid falling into the same pit as Twitter, with its highly-skippable and unobtrusive ads, Snapchat hopes Promoted Stories will ensnare users even if they instinctively try to click past an ad’s first Snap. 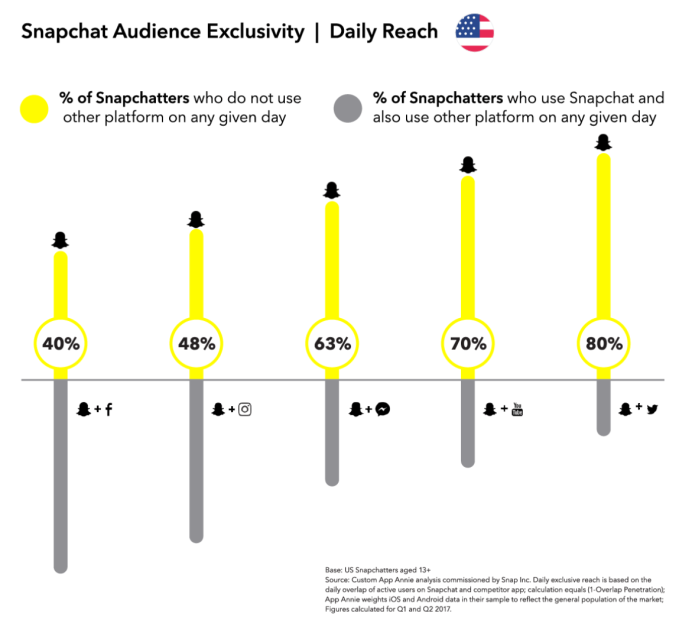 Meanwhile, AR Trial Ads take Snapchat’s World Lens ads and make them functional instead of just fun. Previous World Lens ads remade your reality into a creepy Stranger Things scene or let you stick a dancing Bud Light mascot in your videos. With AR Trial ads, BMW will let you actually place its new X2 vehicle in an augmented view of the space around you, tap to change its color, and walk around it like it’s actually there. The ads can also be swiped up to view a business’ website.

“We wanted to insert ourselves in an organic way into the Snapchat environment and its users’ world. That is the most meaningful way to address our fans in a style that fits the channel” head of Digital Marketing Jörg Poggenpohl wrote to TechCrunch in a statement. A previous BMW sponsored face lens ad in Europe reached 13 million Snapchatters who played with it for an average of 24 seconds.

That’s the magic of these AR ads. Even if you never share the content with friends, you still get extended exposure to the brand just playing with the selfie mask or 3D objects. Actually resizing and walking around a car company’s vehicle will probably leave a bigger impact than just scrolling past some Facebook News Feed display ad. If you reshare that content in private messages or Stories, BMW gets bonus exposure to people who see the brand enmeshed with their friends’ content so they don’t just skip past it like the banners we’ve all grown numb to.

Herein lies Snapchat’s challenge and opportunity. After bloodbath earnings calls and extremely weak user growth, Snap has to figure out how to squeeze more money out of the same number of people. It added just 4.5 million users last quarter, slipping below 3% user growth for the first time ever, down from 17% before Instagram Stories launched.

If it can’t reach the most users, it has to boost average revenue per user as high as possible without completely overwhelming the Snapchat experience with ads. These new formats are a smart way to do that because you’re never forced to watch them. You can choose to tap the Promoted Stories tiles or play with the AR tools.

By offering immersive experiences users choose to dive into rather than cramming light-touch ads down people’s throats, Snap could earn enough to stabilize its businesses and cut its losses. It can’t keep incinerating over $400 million a quarter and expect to have enough cash to develop a killer augmented reality hardware device before giants like Apple invade the market.