Following consumer outrage over YouTube’s handling of disturbing videos aimed at children on its network, the company has now banned one of the more controversial kid channels it hosted, Toy Freaks. The channel, the 68th largest on YouTube with over 8.5 million subscribers, was often criticized for its vile and seemingly exploitive videos featuring a dad and his daughters, which many said bordered on abuse.

YouTube tells TechCrunch the ban is part of a new tightening around the enforcement of its child endangerment policies. It says it will now remove videos to protect “viewers, uploaders and children” when the company receives signals that cause concern.

The removal is part of a broader review of similar content on YouTube, the company also said.

If you’re not familiar with ToyFreaks, consider yourself lucky.

Past videos on the channel included the dad filming the girls in obvious distress, screaming or crying, for example. In one video, the dad follows his daughter into the bathroom, as she cries with a mouthful of blood from a tooth falling out. In another, he sneaks into the bathroom and dumps a bucket of frogs in the tub while the girls are bathing in order to scare them. More videos show the school-aged kids dressed as babies with pacifiers in their mouths, or spitting up on one other. 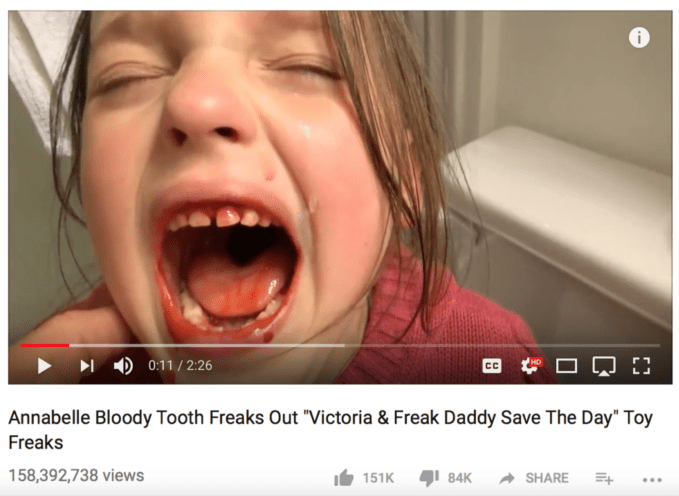 The videos are presumably scripted, and focus on gross-out humor, but they’ve still disturbed a number of viewers as it’s not clear to what extent a child can knowingly consent to participate in videos like this. It also appears the children are actually in distress at times, and that’s being used as fodder for views. (Way to go, dad.)

The channel was specifically mentioned in the recently viral Medium post by James Bridle as one of the more troubling examples of videos targeted towards children that seem to cross a line. Notably, it has for a long time served as one of the origin points for many of the copycat videos that now spread across YouTube.

In its place is a message that “This account has been terminated for violating YouTube’s Video Guidelines.”

The ban follows other actions YouTube has taken following Bridle’s analysis of the YouTube problem and a report from The New York Times.

Today’s YouTube can be scary and weird for children. They’re often targeted with inappropriate content thanks to video creators who are gaming YouTube’s recommendation technology to increase their views – even when kids are harmed.

And though YouTube Kids (the app) offers some basic filtering (and a way to turn off search), many disturbing videos have slipped through, The NYT reported. 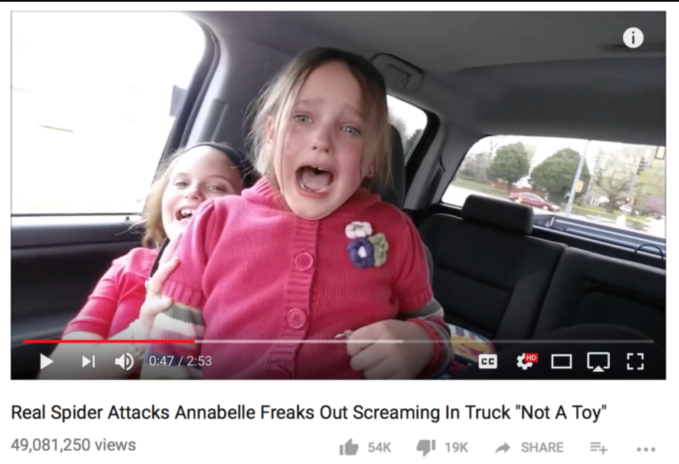 In response to these reports, YouTube implemented a new policy to age-restrict inappropriate videos – like those that make inappropriate use of family friendly characters – so they wouldn’t make their way over to the YouTube Kids app.

To outright ban a popular YouTube channel, however, is a much bigger step on Google’s part.

Tubefilter and The Outline were the first to spot Toy Freaks‘ takedown.

The Outline also noted KiddieToysReview, which had nearly a million subscribers, had two clips removed – one which had over 62 million views. And Freak Family Vlogs, which is the sister channel to Toy Freaks, has been cut down to just one video, the report also said.

Google responded to a request for comment about its actions with the following statement:

“We take child safety extremely seriously and have clear policies against child endangerment. We recently tightened the enforcement of these policies to tackle content featuring minors where we receive signals that cause concern. It’s not always clear that the uploader of the content intends to break our rules, but we may still remove their videos to help protect viewers, uploaders and children. We’ve terminated the Toy Freaks channel for violation of our policies. We will be conducting a broader review of associated content in conjunction with expert Trusted Flaggers.”

Greg Chism (of Toy Freaks) has provided the following statement:

Earlier this week, YouTube informed me of concerns that my videos were attracting audience members who do not have childrens’ best interests in their hearts. Many YouTube community members expressed similar concerns, and their willingness to reach out to protect my children and all children from exploitation reinforces my faith in the YouTube community. Victoria, Annabelle and I want to thank our supporters as my girls have had the opportunity to develop their creativity and self-confidence over the past few years. Their future is bright. While it is disturbing to me that anyone would find inappropriate pleasure in our video skits, I deeply appreciate YouTube’s concerns for my family and I could not be happier with having had this remarkable experience.