At Google I/O this year, Google quietly introduced a new chatbot analytics platform called Chatbase, a project developed within the company’s internal R&D incubator, Area 120. Today, that platform is being publicly launched to all, after testing with hundreds of early adopters including Ticketmaster, HBO, Keller Williams, Viber, and others.

The idea behind Chatbase’s cloud service is to offer tools to more easily analyze and optimize chatbots. This includes giving bot builders the ability to understand what works to increase customer conversions, improve the bot’s accuracy, and create a better user experience.

This data is available through an analytics dashboard, where developers can track specific metrics like active users, sessions, and user retention. These insights give an overall picture of the bot’s health and see general trends.

The dashboard also lets bot creators compared the bot’s metrics across platforms, to see if some platforms need additional optimizations. 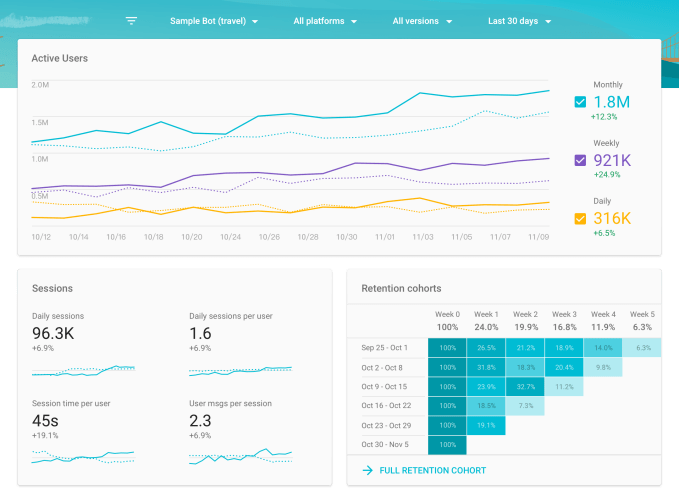 And though it has had many high-profile testers in its early days, it’s not necessarily meant to be used only by larger companies. As a free service, Chatbase supports bot builders of any size – whether they have one or hundreds of bots in operation.

Google notes, for example, that an early customer, BLiP – a bot platform for brands – has been using Chatbase to track over 2 million messages to date across over 50 bots. Ingenious.AI, meanwhile, uses Chatbase with a bot built for a large, Australian healthy insurer to help customers of its eyeglass stores. And Keller Williams uses Chatbase with a bot that lets its 170K associates ask questions, manage appointments, connect with other associates, and track their goals.

Other testers on Chatbase’s platform have included bots for external-facing customer support, entertainment, advice and e-commerce, as well as internal-facing bots for productivity and information discovery, Google says.

Beyond bot analytics, the tool leverages Google’s machine learning capabilities to figure out what sort of problems could be affecting the bot. 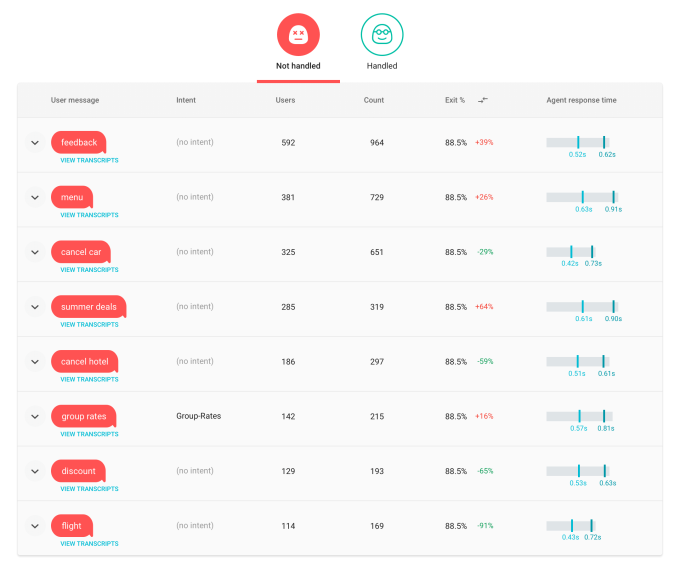 Typically, developers would have to scour through log files to find patterns in user messages, but Chatbase’s system instead clusters user messages that aren’t being handled (this is still available only to Early Access testers) and finds opportunities to answer more requests. It then offers ways to optimize the bot for both problems.

“One example would be for finding and fixing ‘misses,’ or alternate phrasing of supported actions that weren’t originally anticipated by the developer,” explains a Google spokesperson. “Like in so many other areas, machine learning and natural language processing are opening up powerful new opportunities in bot analytics. Putting some of Google’s machine learning capabilities to work for our users is a clear differentiator, and our users are really excited about that,” they added.

Rakuten-owned Viber, which has over 900 million users in 193 countries, detailed Chatbase’s success with a stickers bot it runs.

“We increased query volume by 35% for a popular stickers bot by optimizing queries with high exit rates,” the company said, in a statement shared by Google. “Chatbase has been immensely helpful in improving our bot. Instead of combing through logs, we rely on its machine-learning capability to help prioritize required optimizations — saving precious time that we need to focus on building new features,” Viber added. 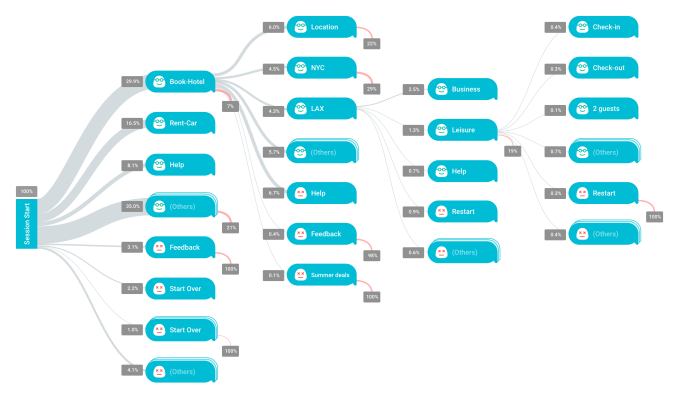 Another notable capability in Chatbase is the auto-generated data visualization of conversation flows across sessions. This lets bot developers see what common paths users take, and where they often exit the application. A Funnel report highlights these steps and shows the success rate per step.

The company announced the general availability of Chatbase via blog post today, adding that it’s free to use.

When asked how the company plans to monetize the platform, Google said that’s something it’s thinking about for the future, but didn’t offer details on those plans.

The public availability of Chatbase comes at a time when chatbots themselves have faced criticism for not being as useful as promised, and often suffering from usability issues. But the market is still in its early days, and chatbots aren’t exiting the scene. Some have even gotten better as developers figure out what works and what doesn’t.

Chatbase isn’t the only solution for chatbot analytics, but the machine learning angle could give it an edge. Plus, Google’s ability to offer it for free could help it achieve market share that bot analytics companies can’t necessarily compete with. However, as an Area 120 project, it’s unclear to what extent Google will back the project long-term. To date, most Area 120 projects have been more experimental. Chatbase seems like the kind of thing that should graduate to a Google product in the future.