Spin, one of several dockless bike-sharing companies now vying for dominance in a number of U.S. cities, has a new weapon to wield against its competitors: Kyle Rowe, the architect of Seattle’s permissive and apparently successful bike-share permit system, who is joining the company to work on government partnerships. In addition, Spin is gearing up to launch in a dozen or so new cities all around the country.

I met Rowe in Seattle this summer, funnily enough at a launch party for Spin’s well-funded Chinese rival Ofo. He and the team at the Seattle Department of Transportation had put together an attractively simple process for launching dockless bike sharing in the city. It made things easy on operators while still holding them to fairly rigorous standards and requiring them to share certain valuable data so it could be used by transit officials and other companies.

This has allowed, for instance, apps like Transit and Migo to add multiple bike-share companies to their maps of local transportation options (although payments are still only available in the individual services’ apps): 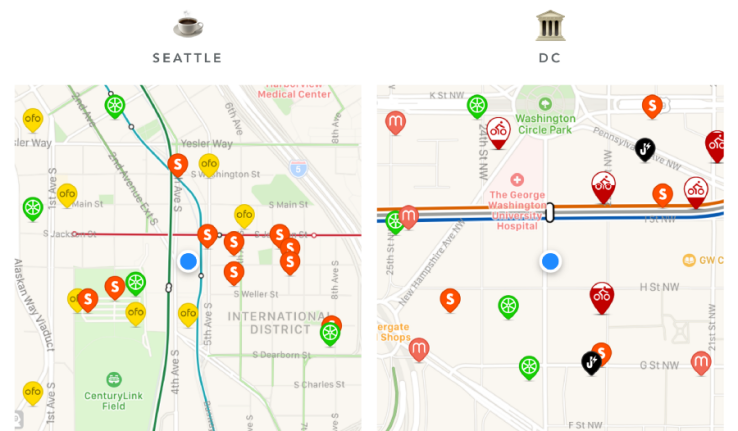 Between Spin, Ofo and LimeBike, the new system was already more popular in its first few weeks than Seattle’s dog of a docked bike system (now defunct) was in a year.

Spin apparently liked it so much, they hired Rowe to spread the gospel elsewhere. Elsewhere, it turns out, was already interested: Rowe told me that in his time at SDOT, “the phone was ringing off the hook” with other municipalities curious about implementing a similar system.

You may be, as I was, concerned about the possible conflicts of interest that arise when a company essentially hires its own regulator right out of the job. But this sort of thing is fairly common in industries like transit, where public-private partnerships are the rule.

“I worked closely with the ethics commission,” Rowe told me. They decided that he should not communicate professionally with SDOT for a year, and can’t communicate with them about bike sharing stuff for two years. Someone else will just have to handle the Seattle connection, essentially.

He admits that there was a certain level of trust between public servants that he’ll have to reestablish now that he’s gone private, but he also pointed out that it’s a very collaborative environment.

“Each city is going to choose their own way of executing this, but we all come together at conferences, do whitepapers, find best practices,” he said. “You see this for example with how bike lanes are designed — at first it was kind of all over the place, but over time we’ve all kind of agreed on a template that makes the most sense. That’s how it’s going to work for this industry as well.”

Spin also announced that it is bringing its service to a double handful of new cities and regions. The timing on these is kind of hazy, since the logistics of dropping off thousands of bikes and getting everything online are complicated, but you can count on the following cities being up and spinning by the end of the year:

Smaller cities, Rowe noted, often don’t have the staff or infrastructure to let a company like Spin just plop down its bikes. That’s going to be part of his role at the company, to start those conversations and make sure any municipality has the tools to make bike sharing an option. So don’t lose hope if you’re in a city with fewer than 100,000 people — you’ll be able to join the party sooner or later.

It looks as if dockless bike sharing is here to stay, and I for one like the idea, although I wish I didn’t have to keep 3 or 4 different apps on my phone just so I can grab whichever bike is closest.